In volume 1, I introduced why we have decided to take on algae projects.

So, what kind of initiatives are we doing?
In this article, I will share with you mainly three projects among our ongoing projects.

●Volume 1: Why did Chitose Group decide to take on the algae project?
●Volume 2: Chitose’s algae projects (this article)
●Volume 3: The three strengths of Chitose in the algae business 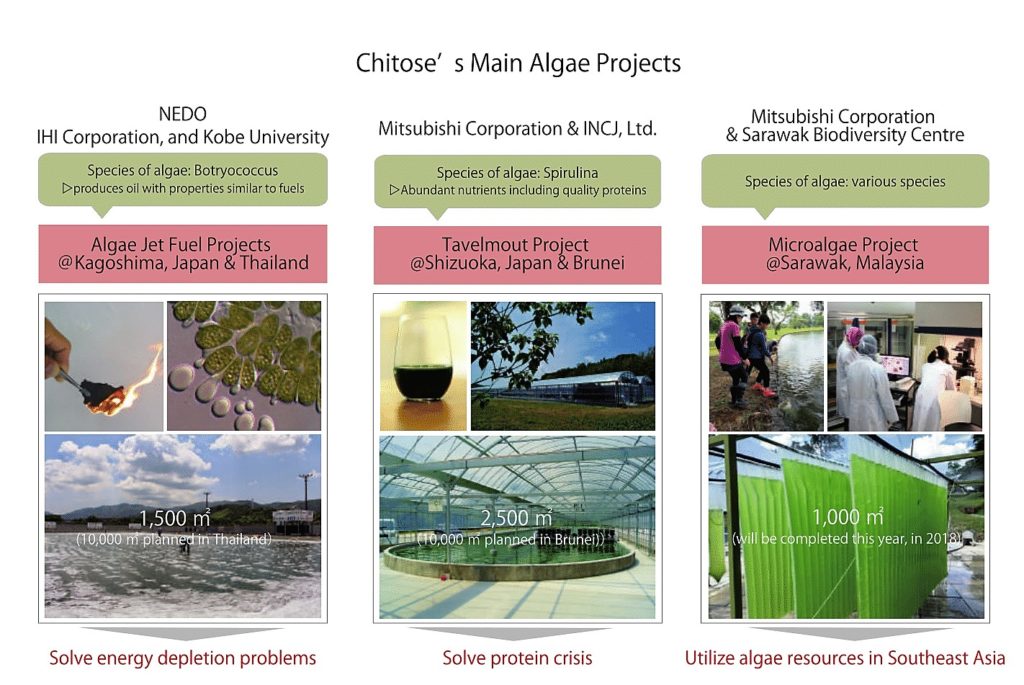 We brought the plan to IHI Corporation and the algae jet fuel project kicked off in 2011. Since 2012, the project has developed into a “national project” as a commissioned project by the New Energy and Industrial Technology Development Organization (NEDO). We successfully created an outdoor culture of 100m² on the roof of the IHI Yokohama office in 2013 and also a large scale culture at an outdoor pond of 1,500m² at Kagoshima in 2015.

Currently, we are preparing a pilot-scale verification tests on a pilot plant of 10,000m² in Thailand for commercial production using the production process that we have developed for stable production.

The alga used in this project is a species of green alga called “Botryococcus”. Since it produces oil about half it’s dry weight with properties similar to fuels, it has been anticipated to become a fuel substitute. However, there had been major concerns for “slow proliferation rate” and “lack of mass culture technology”.

Thus in this project, we aim to breed “fast-growing Botryococcus”, which is developed to grow faster compared to the usual Botryococcus by Kobe University, in order to accomplish lower cost, and at the same time, we also aim to establish mass culture methods.

While continuing research and development in laboratories to improve the productivity of algae itself, the frequency of tests conducted outdoors in various places has been increasing year by year. So, the project members do not often have the opportunity to get together all at one time. I searched for pictures of all the members gathered, but I only had photos from the annual internal Group meeting in June 2017. Although this is not the most updated team photo, the members are more or less the same. 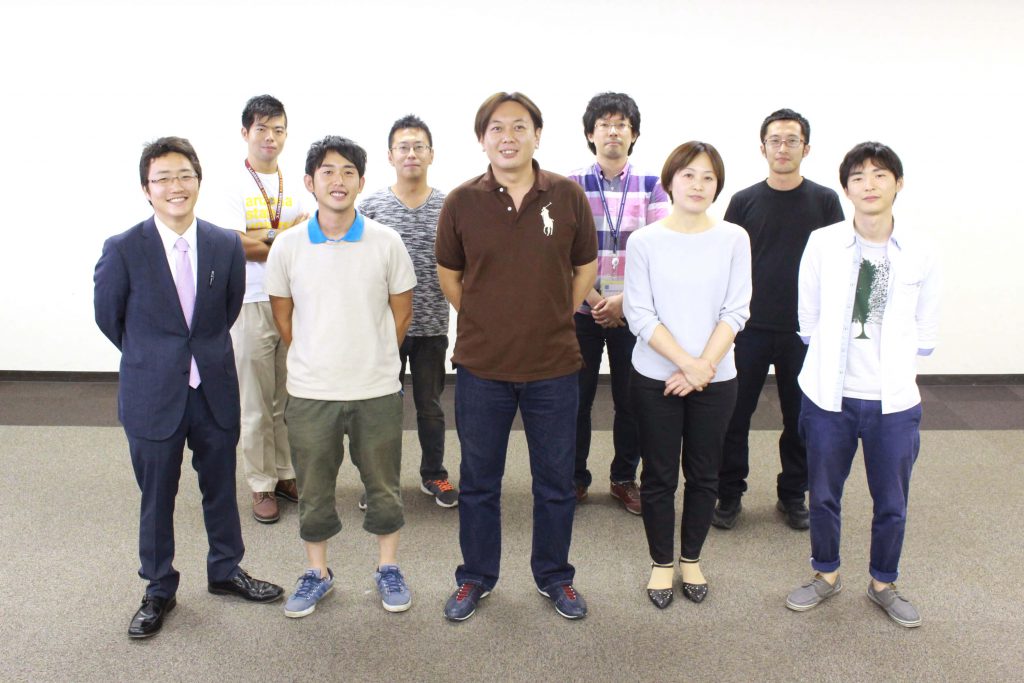 The current problem to solve is manufacturing cost. Even though it is currently not yet possible to be used as a “fuel”, we are advancing our technology development and are confident to solve the problems one by one, and steadily reach our goal.

We will continue to challenge boldly without changing our principle that we grow the algae only with sunlight.

Spirulina contains a wide variety of balanced nutritions, is easy to digest and be absorbed, and is abundant in protein. Generally it is sold as a supplement in the form of powder or tablets. For the purpose of disseminating Spirulina as a “food ingredient” that can provide rich nutrition as it is, we started commercialization of “raw spirulina” from 2013.

Since the general method used to culture Spirulina is not suitable for raw eating, we developed a culture method suitable for Spirulina to be eaten raw as well as a unique culture media while at the same time creating a greenhouse environment through continuous innovation of ideas. Tavelmout Corporation started retailing the raw spirulina that is cultured in Kakegawa-shi, Shizuoka prefecture in 2015 under the brand name “Tavelmout“. 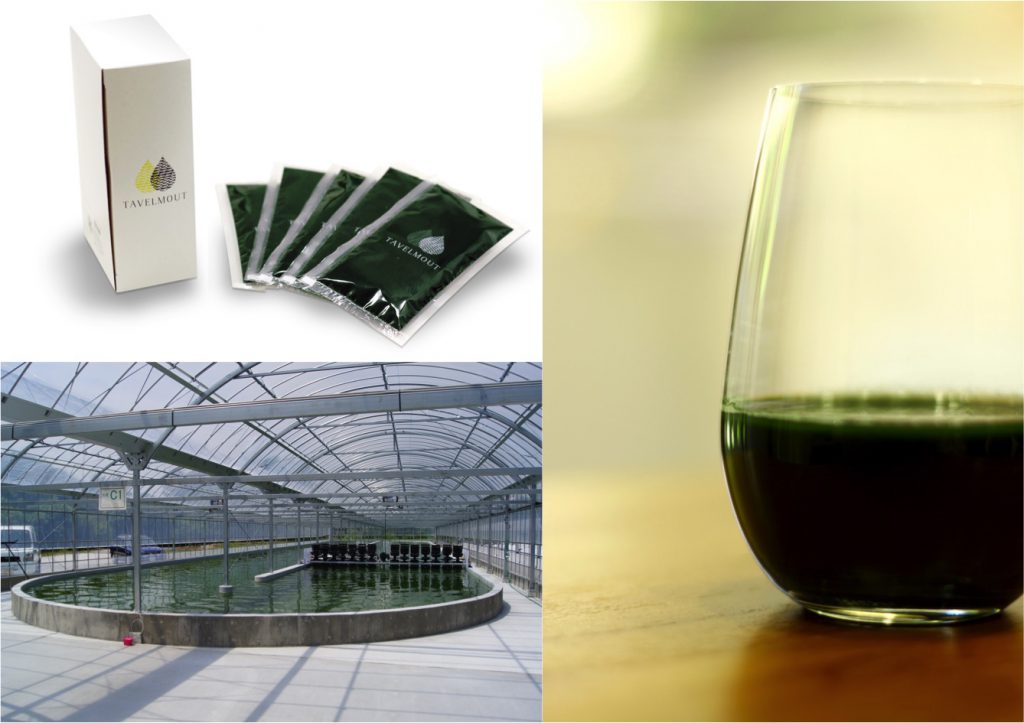 All the members of the team have been working hard to promote the Tavelmout brand name through the selling of new products, frozen desserts and exhibiting at various events I feel that the members have improved in their skills, such as the product development, management of events, designing point-of-purchase adverts, flyers and event booths, web site creation, media management and so on.

Considering the fact that Spirulina is going to be widely used as a protein source in the future, the production cost is still high at present. Thus, we are continuously trying to come up with new technical developments to increase productivity and lower manufacturing costs by culturing in places with more sunlight and promote product development to prepare for the upcoming protein crisis.

［Additional notes June 28, 2019］
Tavelmout Corp. performed a profound brand renewal. The English written form of “Tavelmout” has been changed to “Tabérumo” and has also changed the former logo of a drop of water to a logo that expresses health, harmony, and hope for all living things on earth.
Tabérumo will become a more fascinating brand than what it used to be and appeal to a wider range of customers.

Click here for more information about the brand renewal (Japanese only)

This project aims at the collection and practical application of useful algae obtained locally, and was started in October 2012 by Sarawak Biodiversity Centre* (SBC), a research organization in Malaysia, and Mitsubishi Corporation. Chitose was asked by Mitsubishi Corporation to provide technical consultancy work, so we have been conducting project managements at the site and providing technical guidance to SBC researchers since 2013.

*A research institute in Sarawak, Malaysia with about 100 researchers. For the purpose of protecting and utilizing biodiversity, in addition to this project, they are also working on various projects such as searching for new physiologically active compounds and product development using plant extracts.

※Click here for an algae-loving article by algae girl Owari

Chitose’s researchers have been stationed locally for many years and have been guiding SBC researchers on sampling, observation, and culture of algae, and examination of the business viability of collected algae. In these projects, building  relationships with local researchers are very important. All the Chitose members who have stayed in the site so far have built good relationships with the local researchers and I feel they are truly reliable. Based on good relationships, resources and technologies constructed in this way, we are still continuing to develop technology and business, together with the project-leaders SBC and Mitsubishi Corporation.

Currently, a large-scale demonstration test with the Chitose’s original designed PBR (photobioreactor) is underway to commercialize the collected algae. Keep your eyes on the future of highly profitable business development based on the facilities that meets the standards of low cost and high productivity, utilization of local biological resources, technological improvement of local researchers, and building personal relationships and trust across borders and fields.

Moreover, besides the projects introduced by this article, Chitose is handling a lot of algae projects, including assistance to algae projects by certain manufacturers and new projects that are currently underway in Japan and Southeast Asia.