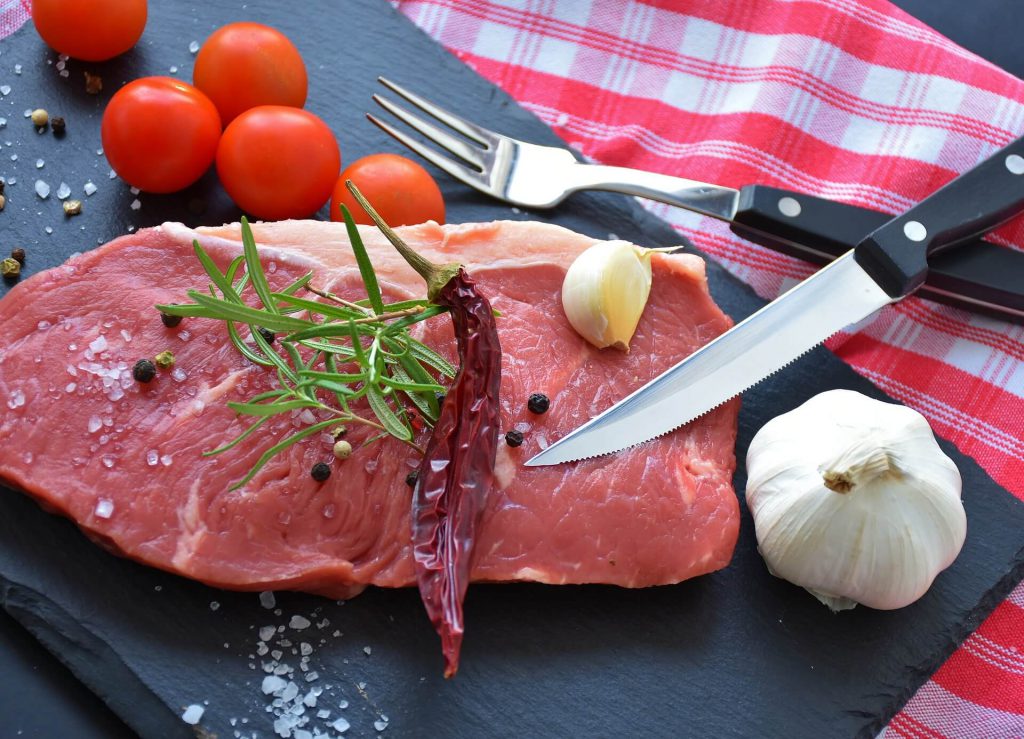 A start-up company that has been developing a certain type of “meat” announced that they were raising 55 million dollars in their latest funding in December 2017 for the purpose of tripling production capacity. The announced total amount raised was 72 million dollars, including investments from celebrities like Microsoft founder, Bill Gates and actor, Leonardo Dicaprio. The name of the start up company is “Beyond Meat”.

From the name, you might start to imagine something amazing, far greater than any of the meat products you have ever had.

On the official website, not only will you see pictures that would cause your mouth to water, but also concise explanations regarding the quality of the products, including facts like higher protein and lower cholesterol levels compared to beef patties. No wonder they have called themselves “Beyond Meat”. It is also noteworthy that Beyond Meat products are successfully being carried at major US grocery stores and fast food chains, totalling at 19 thousand or more stores in the United States.

However, the key feature of Beyond Meat is that their “meat” is actually made from plant-derived ingredients. Besides Beyond Meat, Impossible Foods also sells meat made from plant-derived ingredients, and their total procurement amounts to nearly 300 million dollars. The meat of Impossible Foods is unique for its dripping meat juice when the meat is baked. You can see this on their official website, but I wouldn’t recommend viewing the pictures when you are feeling hungry!

In Japan, “Nazoniku (mysterious meat)” had been a hot topic for a period of time. Since Nazoniku contains a portion of pork, it is not meat made completely from plant derived ingredients. However, it is based on the similar concept of replacing raw materials of animal origin with raw materials of plant origin.

Do you know that there is actually a realistically more urgent motive other than “consumers’ health consciousness” behind the fact that such substitute for meat is made from plant-derived raw materials?

It is the worldwide protein deficit problem (= protein crisis).

You may think that protein shortage is quite impossible since declining birthrate and aging population are progressing in Japan, and moreover, now we live in the age of gluttony. Although you may not place importance on the problem, at any rate, let’s think about it more.

If the current eating habits continue, factoring in population growth and economic growth, it was estimated that world protein demand would double that of 2005 by 2050. In particular, the protein demand in the Asian region that has many emerging countries will increase considerably.

However, as I will describe in detail later, it is difficult to ensure sufficient protein production capability to cover such a rapid increase in demand by 2050. As a result, it was estimated that the “protein crisis” in which the collapse in the balance of demand and supply of proteins would become noticeable at the earliest around 2030.

There are two major solutions to this problem.

One is to change human’s eating habits from a meat inclusive diet to vegetarian diet.

The other is to significantly increase protein production.

Truth be told, protein intake from a meat inclusive diet is less efficient compared to that of a vegetarian diet. What does it mean?

It can be understood by considering feed conversion efficiency, that is, how much feedstuff is needed to produce 1 kg of livestock products.

For example, it is said that feed grains of approximately ten times the quantity of produced beef are required for beef production. Assuming that the protein content rate of feedstuff (of grain origin) is about 10% and that of produced beef is about 25%, beef production can be considered essentially as an operation to convert 1 kg of plant protein into 0.25 kg of animal protein. In other words, the total protein amount decreased by three quarters.

It is obvious that ingesting 1 kg of vegetable protein is more efficient than ingesting 0.25 kg of animal protein from the viewpoint of protein supply. 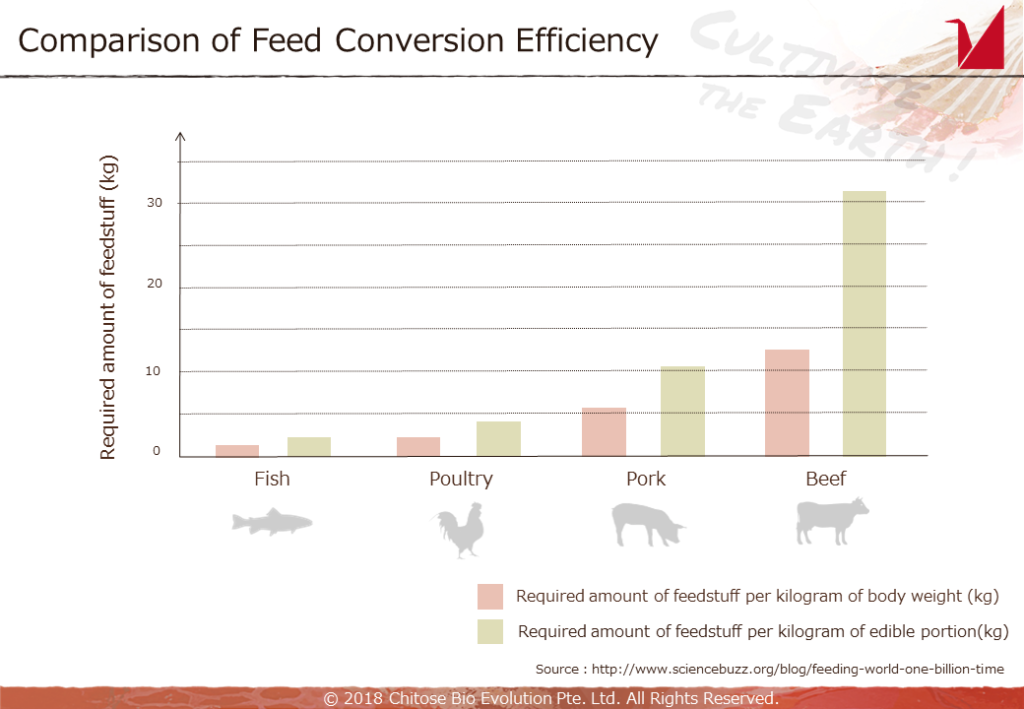 These reasons are the motivations behind the efforts to make pseudo animal protein products by directly processing plant proteins without converting them into animal proteins, as developed by companies such as “Beyond Meat” and “Impossible Foods”. It is also based on these reasons that poultry farming and aquaculture which have relatively high feed conversion efficiency is significantly growing around the world.

For that reason, in order to stabilize the supply of protein in anticipation of the protein demand in the future after 2050, the second solution “increase protein production” is fundamentally necessary.

The problem of protein crisis is seemingly solved if grain production increases, but in actual fact it is not as easy. I will now carefully consider why it is difficult.

It was estimated that the area for farmland would increase only by a total of 10% or less at the maximum between 2005 and 2050. Although the possibility of substantial expansion of farmland area by cutting forests is also being debated, in this case, it may not be possible to secure fresh enough water resources to supply to the expanding large farmlands.

In addition, over the past 60 years, including the time when mass production of grain called “green revolution” occurred, the average annual production increase of the soybeans and maize which recorded the highest value are about 1.3% per year and 1.6% per year respectively. From these figures we can see that it is difficult to considerably raise the yield more than this by 2050.

Due to the development of gene recombination technology, the increase in the unit yield and the decrease in the use of agrichemicals are greatly expected . However, as described in “Failure to Yield” published in 2009 and “Genetically Engineered Crops: Experiences and Prospects” published in 2016, this is not conclusive result to show that the genetically modified plant (GMO) contributed significantly to the yield increase since more than 20 years have passed from the time the first GMO was commercialized up to the present day.

Also, since approval and licensing of the use of GMOs are extremely time consuming, it is difficult to predict the future where commercial production of grain will be dramatically improved in a short period of time through the application of gene recombination technology.

Thus, it is very difficult to cover the protein demand in 2050 by increasing grain production, as long as you consider protein production through conventional agriculture.

Compared to conventional agriculture, algae culture has many advantages and remarkable features as primary production. I will list the most important ones below.

Basically algae grow in water. Therefore, culture and production of algae are possible even in parts of the land where conventional agriculture cannot be performed, as long as there is a certain water storage facility such as a pond or a pool.

Large-scale commercial productions of algae have been performed in the lands where there are less rainfall and unsuitable soil for agriculture, such as Israel’s desert area, Hawaiian lava plateau, New Mexico and California’s desert areas, Australian former saltfield, etc.

Unlike conventional agriculture, algae are generally produced in a pond-like facility storing water as mentioned in (1). Therefore, in algae culture, outflow of freshwater to ground surface and underground which is a problem in conventional agriculture is minimized, and the loss of freshwater (agricultural water) is limited to the evapotranspiration from the water surface and the loss in the harvesting process .

Moreover, many algae species that can grow well even in seawater and brackish water are known. When you choose these algae for production, you can further reduce the required amount of freshwater resources.

Most of the algae that grow floating on water require lower energy to support its anatomical structures as compared to land plants that grow on the ground. This indicates that compared to land plants, algae contain smaller levels of indigestible (not edible) organic matter, also known as cellulose and lignin, and higher levels of valuable organic substances*3 such as lipids, proteins, carbohydrates.
*3＝Economically valuable organic matter

Therefore, the production volume of valuable organic matter per unit culture area (farmland) is larger than that of conventional agriculture based on land plants. 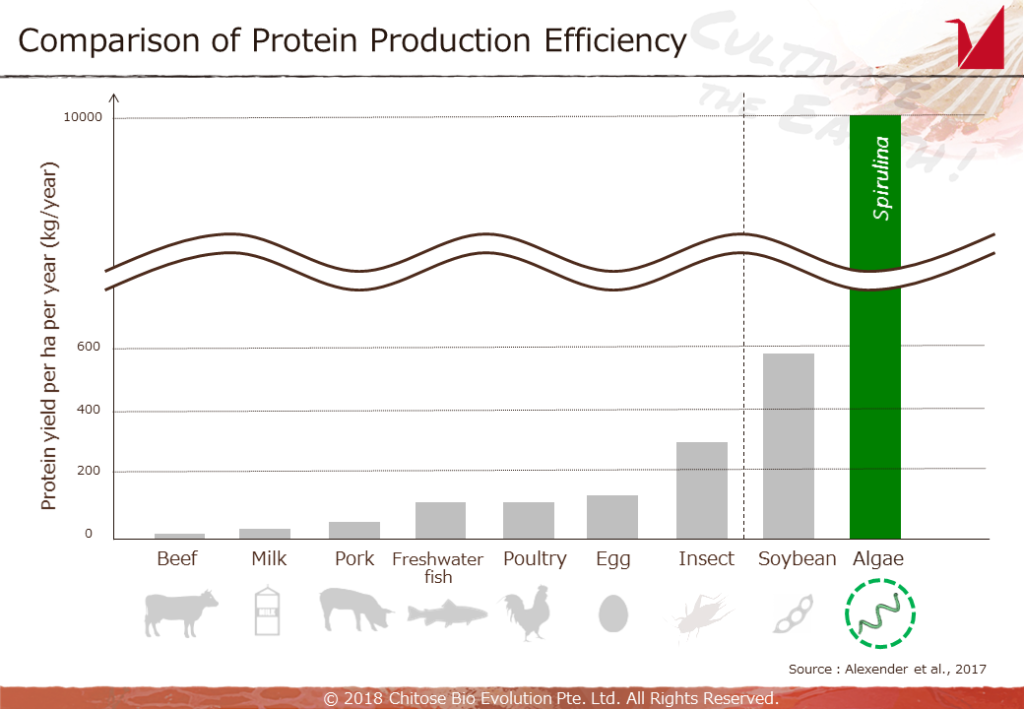 Let’s compare these advantages based on the actual numerical values.

On the other hand, for example, Earthrise, a subsidiary of DIC, and Cyanotech, based in Hawaii, USA, reported that they produced algae called Spirulina as a health food with the productivity of 15 tons or more per hectare per year in dry weight. Spirulina is known to have a very high protein content among algae. For example, the protein content in raw spirulina products, which are produced by Tavelmout Corporation in a manufacturing method that does not undergo heating process, is as much as 72% (dry weight ratio). Based on these values, protein productivity per unit area reaches about 10 tons of protein production per hectare per year. In other words, protein productivity in Spirulina is about 8 times that in soybeans.

Besides high productivity of protein, many spirulina commercial productions are carried out using minimal fresh water resources in agricultural inappropriate areas. For these reasons, in addition to resource conservation, I think it is very important that these algae cultures do  not compete with existing conventional agriculture and maximise the usage of photosynthesis to increase the net agricultural production.

Now, let me show you the potential of protein production in algal culture. If you produce Spirulina with high protein content in an area of about 10% of the world’s largest palm plantation in Indonesia (= about 60,000 hectares), according to a calculation, you can supply the amount of protein that is required for 24 to 38 million people per year.

The reason why I cited palm farm as an example here is that you may easily imagine it as a plantation and because I can refer to the numerical values such as specific farmland area. However, I do not recommend converting a palm plantation for algae cultivation.

In the case of the above example of converting palm plantation to spirulina production facility, it is not possible to make use of one of the advantages in algae culture, which is the “ability to be produced in agricultural inappropriate area”, and it arises a problem of competing with existing agriculture.

However, instead of palm farms, sites for vast former shrimp farming ponds for example, which cannot be used for agriculture have been left to be arid and unused in Southeast Asia, India, and Latin America in a scale of a few thousands to tens of thousands of hectares. I think that it is better to culture algae using such lands. Other agricultural inappropriate areas with suitable climate for algae culture exist widely all around the world.

It is good if we just imagine or think about  it, but we may limit the opportunities for considering freely about the possibilities other than what we can imagine. In other words, I feel it is very common that we tend to make things too convenient and simple that we end up having a narrow view of things these days.

Many problems, such as technology development accompanying decreasing production cost and increasing scale, are left unsolved for large-scale commercialization of algae culture for the application of biofuel, food, feedstuff and so on. Under the present circumstances, I believe that we can imagine a future world where more people will benefit greater if we all cooperate regardless of where we are in the world and endeavor to solve these problems without losing multilateral viewpoints and free ideas.

Collaboration on Writing and Editor：Ye Deguchi