People are endeavouring to solve various issues by means of various technologies in the world.

There are various technologies such as sensor technology, the current trending AI technology, design technology, and so on. On the other hand, Chitose Group is endeavouring to solve various issues by means of “breeding” and “culturing” technology through living things.

Now, let me share with you the story about this “algae” that Chitose Group has been focusing on  as well as actively promoting commercialization and research and development since the middle of the 2000s.

When you hear the word, “algae”, you may think that you are not interested in them.

In fact, I also was not interested in “algae” as much initially.

However, first impressions aside, “algae” have become a natural and necessary existence for me as I got to know the potential abilities of the little green creatures and Chitose members that are struggling to solve social issues by algae technologies.

As I was attracted to the charm of algae, I started up an algae information site “Modia” and served as the editor in chief. There is almost not a day when I do not see the word “algae” these days.

Leaving the more specific information about algae for “Modia”, in CHITOSE JOURNAL, I will share the stories of algae in 3 articles as follows:

※Note: Since each project is continuously being developed at every moment, all contents are based on the information at the present time (March, 2018).

To live in abundance for a 1000 years and beyond

Chitose Group is a group of bioventure companies which are endeavouring to develop technologies and businesses for humans to live in abundance for a thousand years and beyond.

Yes, “Chitose” comes from the meaning “millennium” in Japanese.
▷The Origin of Chitose’s name and logo

Food and fuel are absolutely indispensable resources and should be conserved in order for human beings to live prosperously in the future a thousand years from now.

By the way, why do we use food and fuel?

It is to obtain “energy”.

We use energy from “organic matters” contained in food and fuel.

Actually, all the energy contained in organic matters comes from solar energy.

The natural process performed by plants called “photosynthesis” is the gateway to convert solar energy into the form of organic matters and incorporating it on to the earth.

※Note: Fossil fuels such as petroleum and natural gas are organic matters that were produced by photosynthesis a long time ago and have changed in form over millions of years.

We need a large amount of “photosynthesis”

Due to worldwide population growth and improvement in living standards, it is estimated that food (especially protein) and energy demands are increasing dramatically and supply will become insufficient in the future at the current rate that we are consuming them.

To solve this problem, it is necessary to produce organic matters (biomass) that can be utilized as food and fuel more efficiently and more sustainable than ever before.

Since organic matters are what solar energy has changed in form, it is necessary to have enough solar energy as a premise, but we do not have to worry about this point. 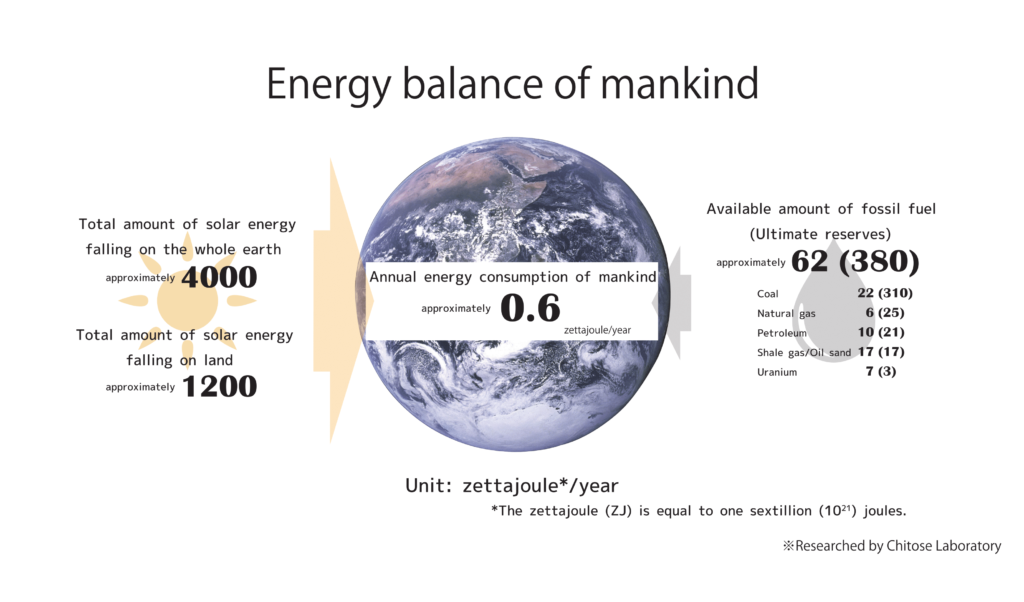 Thus, it is necessary to increase the amount of “photosynthesis” that converts solar energy falling on the earth into organic matters, for sustainable prosperity of mankind.

However, the increase of food and fuel demands cannot be covered only by expanding conventional agriculture-based biomass production (agriculture in land), since the land available as farmland is limited and no prospect of actually improving the productivity has yet emerged.

In this situation, what is noteworthy is “algae”.

Why is “algae” best for increasing the amount of photosynthesis?

Why should we focus on “algae” to increase the amount of available photosynthesis?
There are three major reasons. 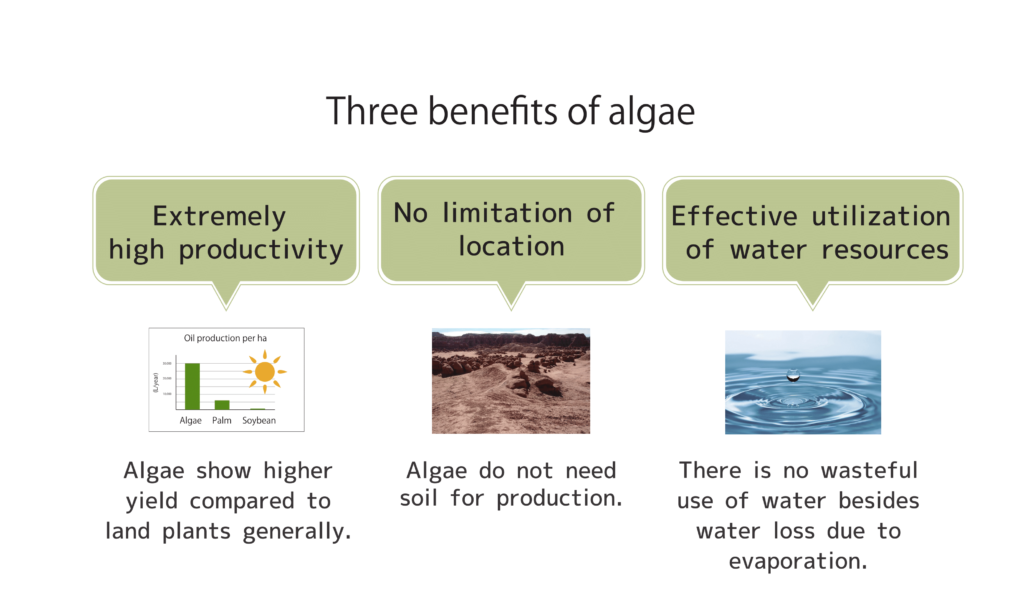 In order to sustain their body on the ground, plants share much of the energy synthetised by photosynthesis with skeleton parts, such as root, stem, leaves, etc. On the other hand, since algae live in water and do not have to form skeletons, they can use  the energy needed to synthesize proteins and oils, that humans can utilize, more efficiently and in greater quantities than plants. This is the reason why the productivity of algae is much higher than that of plants.

② No limitation of location

Algae can be cultured basically anywhere as long as there is water and light. For this reason, it is possible to effectively utilize lands where plants do not grow and are not currently used, such as deserts and wastelands. In other words, it can be separated from agriculture in terms of utilization of land. In fact, algae which humans use for practical purposes are currently cultured mainly on the lands that cannot be used as farmland.

Algae tend to give the impression that they use a large amount of water, but they can actually be cultured with much less water resources than what is usually required for agriculture. In agriculture, most of the water sprinkled on farmland evaporates into the air or permeates underground, whereas in algae culture, only the evaporation from the water surface occurs. In addition, it is possible to use brackish water or seawater as water resources other than freshwater if species grown in seawater are chosen.

In this article, I have shared with you the fact that food and fuel will run short in the near future, that we need to increase the photosynthesis amount in order to solve the problem, and that algae are optimal for increasing photosynthesis.

By the way, food and fuel are not the only fields where algae display their great ability.
Various organic matters produced by photosynthesis in algae can be utilized not only as food and fuel but also as materials in various industrial fields. 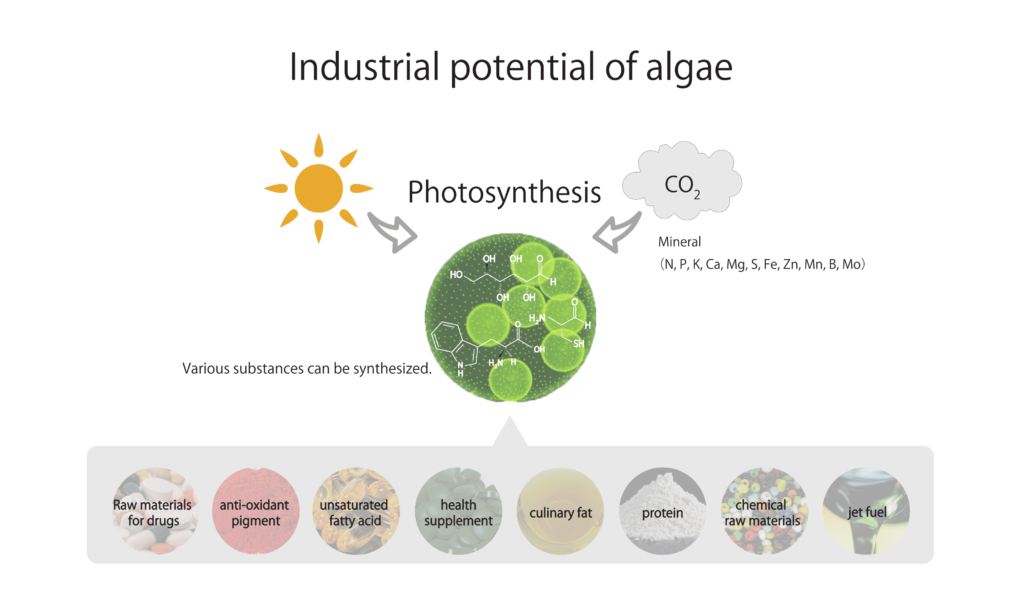 In the next article, Vol. 2 Chitose’s algae projects, I will introduce in detail the projects that we are working on.