CHITOSE Group has received  a lot of support from the Southeast Asian countries, particularly from Malaysia.

In fact, among the 11 companies that are in CHITOSE Group, Chitose Agri Laboratory Sdn. Bhd. (commonly known as CAL) was the company that was established after Chitose Laboratory Corp. (2012). CAL focuses on producing strawberries and tomatoes through environmentally sustainable agricultural methods, as well as the purification of wastewater generated from palm plantations by using microbes and duckweeds.

There are several reasons why CHITOSE focuses its activities in Malaysia. Firstly,  Malaysia is located in a tropical zone near the equator and has a warm climate. Secondly, Malaysia has an abundant amount of solar energy, fresh water resources and vast flatland. We are also paying attention to the country as a potential biomass supplier in the future. Besides producing strawberries and tomatoes or wastewater treatments at palm plantations which are already being carried out, we also think that Malaysia will be a very important country as a primary industrial base for the algae biomass industry, especially as a location for the production of biomass.

Thus we planned three days tour last month, in order to experience Malaysia as a stage for the biomass industry. In spite of being inexperienced in planning such an inspection tour and there being many rushed guides, it was a great success with 40 Japanese and 80 people in all including the Malaysian participants.

✔It was my first time experiencing working on an algae business in Asia. I think this opportunity was possible because it was CHITOSE Group.

✔There are no other opportunities for those who don’t know about the present situation of Malaysia to visit and feel the appeal or the theme by understanding the current state and the potential.

✔I was surprised by the wide connections between CHITOSE Group and the industries in Southeast Asia related to the bio business.

✔I was impressed by the system that was formed in Malaysia to promote the commercialization by not just shaping the network in the country with cultivation industry or palm plantation industry but also with research institutions such as universities.

✔I was impressed by the power of CHITOSE, involving the government and the research institutions by accurately understanding the local’s needs and the speed from developing the techniques to industrializing.

✔CHITOSE Group is an organization where you can  feel the President’s leadership and strong enthusiasm and the abilities of the employees. I’m sure that CHITOSE will open up the future of bio-industry.

✔The employees are younger compared to the general Japanese companies, but each person seems to have the right to make decisions  and a sense of speediness can be felt.

Now, let me explain the tour in this digest.

A ceremony to open one of the largest algae cultivation facilities built in the tropical zone in the world, was held on August 27th (Tuesday) at Kuching, the state capital of Sarawak state in Malaysia in joint sponsorship with Mitsubishi Corporation and SBC. 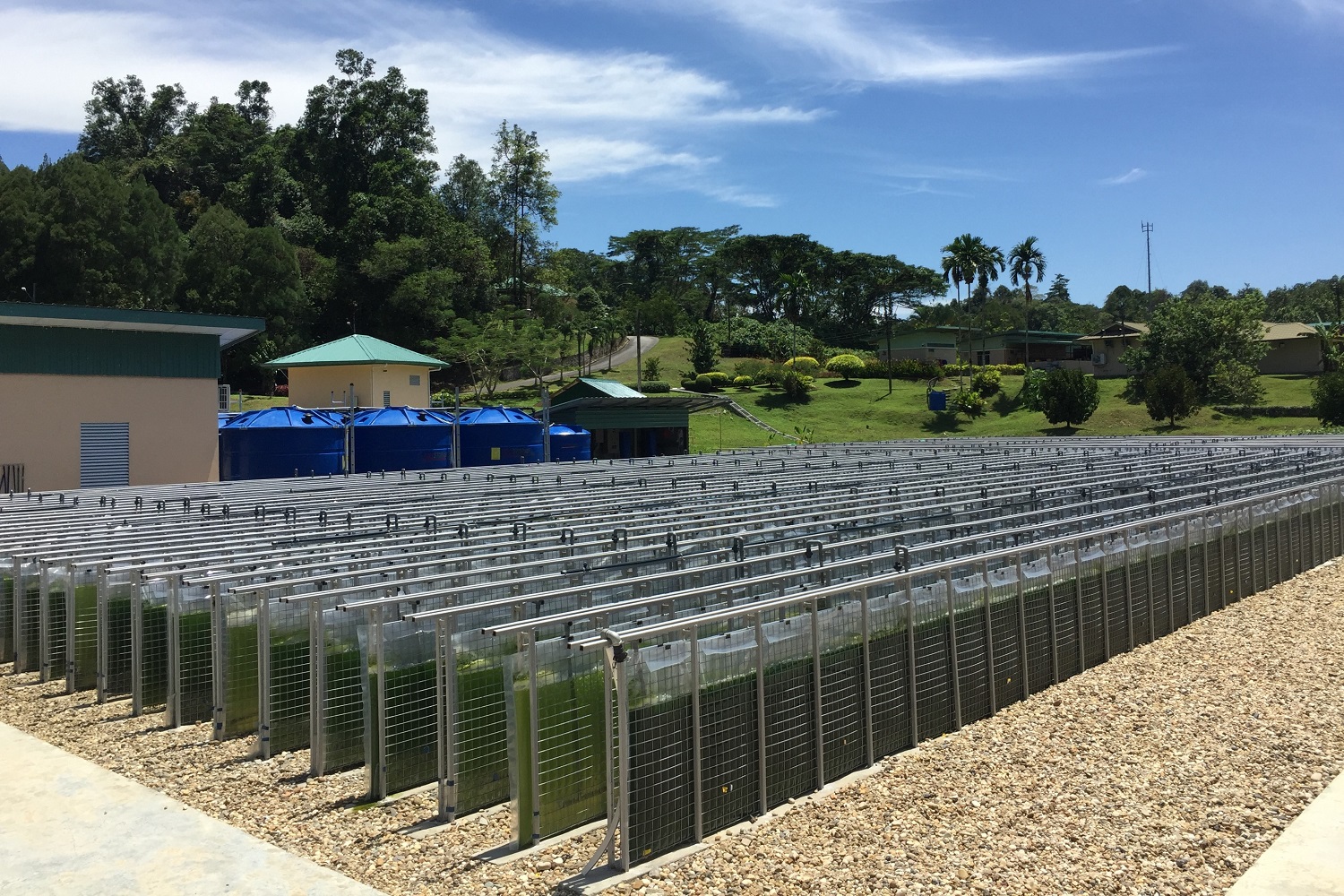 Check the press release below for more details about algae cultivation facilities.
▷［press release］Establishment of Economic Mass-Production of Microalgal Biomass Utilizing PhotoBioReactors -Open Demonstration with One of The World’s Largest Facilities Under Tropical Outdoor Environment-

We saw Sarawak state, which forms as an individual country in Malaysia for its unique culture, being enthusiastic to work on the algae business as a whole state government in a large-scaled ceremony.

You can see a video which commemorates the forming  of the MOU below. 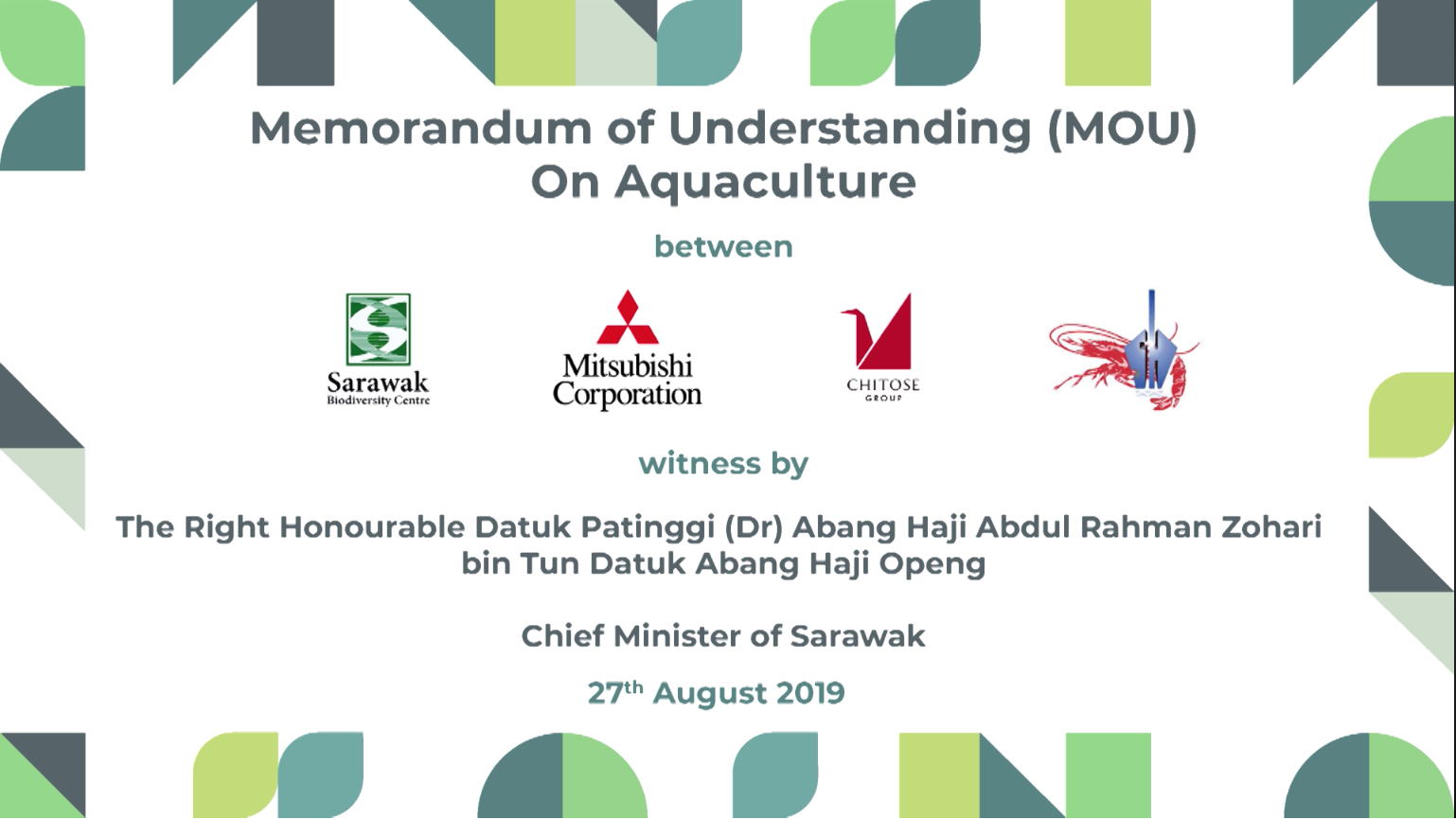 The details of the ceremony and reports about the 100 square meter cultivation facility were covered in many media.

◯Forbes
The report introduces SBC’s activities on The Economic Journal which is known for listing of world’s billionaires.
https://www.forbes.com/sites/johncumbers/2019/09/12/there-is-more-money-in-the-borneo-rainforests-biodiversity-than-in-the-deforestation-of-it/#431caecd337f

◯Algae World News
This is a media where all algae information gathers from science to business in the world.
https://news.algaeworld.org/2019/08/open-demonstration-with-one-of-the-world-largest-algae-production-facilities-under-tropical-outdoor-environment/

◯Mynavi news
This is a Japanese article. The topic about the cultivation facility was reported.
https://news.mynavi.jp/article/20190826-868601/

◯NNA Business News
This is a joint communication media where people from the world check the Asian trends in Japanese corporations.
https://www.nna.jp/english_contents/news/show/20190821_0007

◯Biofuels Digest
CHITOSE PBR is gaining attention even in the biofuel businesses.
https://www.biofuelsdigest.com/bdigest/2019/08/20/japanese-biotech-group-launches-largest-tropical-microalga-facility-in-malaysia/

◯BORNEO POST
The most authoritative news paper company in the region published an article about us.
https://www.theborneopost.com/2019/08/28/huge-allocation-slated-for-rd-in-sarawak-under-12mp-cm/

We visited a large scale commercialisation test site where the algae cultivated at the cultivation plant is  used as feeding for shrimps or water purification.

You can know more about Seahorse Corporation by watching the MOU animation below.
https://www.facebook.com/watch/?v=374248999895856

■A biomass industry seminar with University of Malaya

The main players of the Malaysian public and the private sectors spoke not only about the global influence of algae but also about the algae biomass industry which is expected to lead the future biomass industry from now on. It was an opportunity to actually feel the seriousness and prowess of their academic level.

◯The speaker：
・Dr. Phang Siew Moi
Institute of Ocean and Earth Sciences Deputy Vice Chancellor
Dr. Phang Siew Moi is a professor of Malaya University and a pioneer in Malaysian algae research and authority of the world of algae research. He was given a title of ‘Emeritus (an emeritus professor)’ which is approved legally and internationally, on October 12th.

・Dr. Liew Kan Ern
CEO of Aerospace Malaysia Innovation Centre
Dr. Liew Kan Ern is also the head of technology of the Airbus, and the main person in the Malaysian aviation business who has a big supporters such as Airbus, Roll-Royce, and the Malaysian government. He has academia knowledge and also a practical view about bio aviation fuel.

・Mr. Vinesh Sinha
Founder and CEO of FatHopes Energy
Mr. Vinesh Sinha is the representative of a company that strategically recycles cooking waste oil from fast food restaurants (McDonald’s or Kentucky Fried Chicken or Pizza Hut), and produces and sells biodiesel fuel. In 2018, the company was chosen as the Forbes’s ”30 under 30 – Asia – Industry, Manufacturing & Energy” award.

To feel the scale of the biomass industry, we visited the palm plantation which is managed by the biggest palm company in Malaysia and boasts the world’s largest palm oil cultivation area. We felt their desperation to not be criticized about the environmental issues any more.

All members forged ahead for about one and a half months from the start of this inspection project, so that as many people as possible who read this article can understand the scale and strength of the biomass industry in Malaysia.

When we started preparations, we noticed that this project was harder than we imagined for the members of Chitose who are a bunch of science people. Actually, there were many obstacles in arranging the program. However, I am full of appreciation to all the participants that accepted the little mishaps with laughs.

✔There is much hope for further growth in Southeast Asia in the future. I feel that it is Chitose’s keen eyesight to decide to especially focus on Malaysia, where there is excellent balance of the present development and the potential for growth.

✔I felt the strong desire of Chitose to try to bring life to the bio industry not only in Malaysia but also within and without nations. Chitose is a company which has the possibility to decide the future of Japan’s bio industry.

✔I see Chitose leading the other country’s bio venture companies because this company was the first to focus on the point that it has a limit in domestically expanding the biomass industry, and also to actively construct relationships with the people in Southeast Asia.

As you can see from the participator’s comments above, I can feel that many people who participated understood that Malaysia is the best place to vitalize the biomass industry, and understood how serious we are about it. Once again, thank you very much for participating. We want to keep on working to make the agriculture and palm plantation sustainable, and of course make the best use of the algae business in Malaysia.

Lastly, I would like to conclude with words from Hoshino who is the manager of this visit to Malaysia, and who is aiming to realize a large-scale (1,000 ha !?) algae cultivation.

In this time I was able to move toward the aim little by little with the support from many people, such as the members of Chitose, who kept operating the project even though they were mistaken as one of the people working on the site by the inspection group from Japan and were spoken to in English, the supporters of our activities in Southeast Asia even in private from inside and outside the country, and the people that supported all the activities from the backstage.

On this inspection, many people might have experienced the amount of power at the site. I keep going forward so that I can see the 1000ha of algae production base with my own eyes with these people and the people who support us.

We would appreciate your continuous support in order to realize a world where many people will be happy to be involved.