Hello! This is Yu Deguchi from the Group Communication Division in CHITOSE GROUP.

CHITOSE GROUP has been issuing our very own newsletter called “HOTTOPICS“ since the time of Neo-Morgan Laboratory, presently known as Chitose Laboratory Corporation, albeit on an irregular basis.

Through the newsletter, we sometimes receive a request to give a lecture or are asked to do a consultation regarding a project. Thus, the newsletter is an important tool that connects us to everyone outside the company. Also, we often receive messages of warm support from people who receive the newsletter. It gives us power when we realize that many people are cheering for us.

Originally, this newsletter started in December 2006 because of a suggestion by a member of the Business Development Division at that time. He was in charge of the writing. Let’s digress a little. It was written in the editorial note of Vol. 1, “There is a scary “rule” in our company that the person who initially made the suggestion should be the one fulfilling the task”. I thought Chitose has not changed since then (regardless if it is good or bad). After that, the Group Representative Mr Fujita has been in charge of writing the newsletters on his own, since the December 2008 issue. 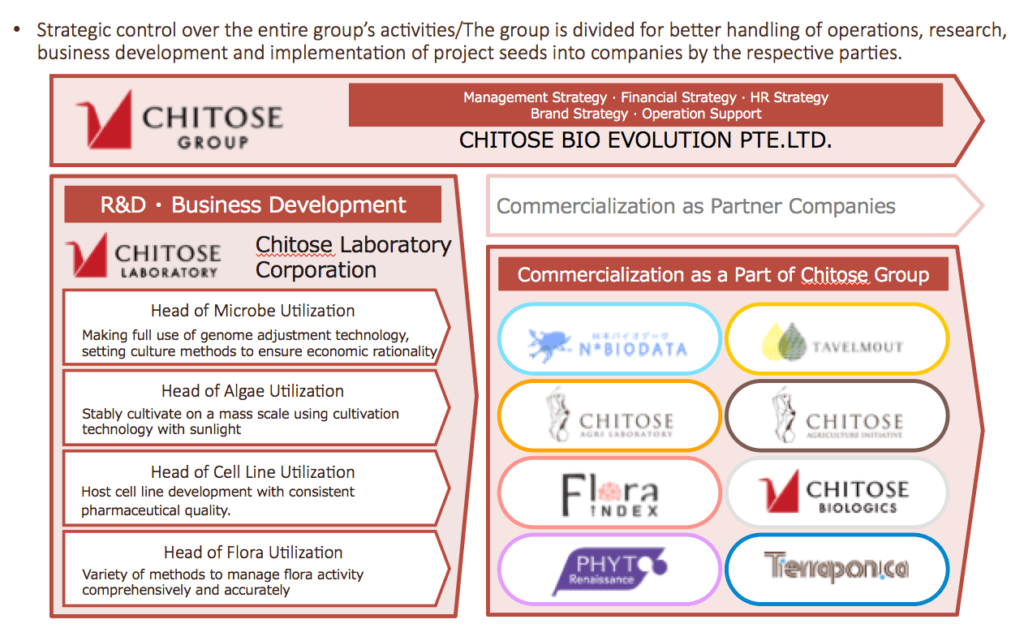 Fujita declared that he would write the newsletter by himself no matter how busy he was. However, recently his schedule was so packed that he said, “I didn’t even have the time to sit on the chair today”. Seeing him get overwhelmed with his busy schedules, without realising it, the newsletter became my job.

Although the new HOTTOPICS started with a similar format as before, after an initial trial and error,  we changed it to a “special feature” that focuses on one specific topic (the articles here and here have been posted on the website based on this “special feature”). As the second trial and error, this vol. 51 has been sent as the first web article while the newsletters were previously sent in PDF format.

By webifying the HOTTOPICS, I will be able to deliver the present status of Chitose Group more frequently and more consistently than ever before! The feature articles focusing on single topics will continue to be posted irregularly on this media (CHITOSE JOURNAL).
※What’s “CHITOSE JOURNAL”?
https://journal.chitose-bio.com/en/about_chitosejournal/

●We hold an internal Group meeting once a year

On May 18 (Fri), we held an internal Group meeting which was the only chance for all members that worked at different locations in the world to get together once a year. It felt like a breath of fresh air upon seeing some members again after a long time and others for the first time.

At the meeting, the Group Representative Fujita gave a 3 hours talk. Since his talk included a lot of confidential information, I will select a story, which i can share, that left the greatest impression on me.

What is necessary for personal development? It is “place” and “perspective”. Fujita told us that it is important to always be aware of the two things. “Am I giving a place?”, “Am I providing a perspective?” ｗhen educating a person.

My direct supervisor is the Group Representative (ie Mr Fujita). Looking back, I have certainly been given a lot of “places” and “perspectives”. He does not say “do it this way” but “there is this method of doing it”. Since he continuously guides me in this way, I feel that I’ve adopted a little bit of Mr Fujita’s values in me.

I’m very grateful whenever someone shares their opinions (perspective) with me as I feel like I’ve gained that person’s values in my life, and also I feel that  I’ve got a new “perspective”. Rather than saying “That is wrong!” and rejecting others’ opinions, when you take time to think and absorb, you can increase your “perspectives”. This may be important for personal growth.

It is definitely unreasonable to ask new members to make a “place” on their own. They accumulate “perspectives” in the given “place” at the beginning, and then gradually move to giving a “place” at the sidelines. This cycle makes the whole organization grow (CHITOSE GROUP aims for all its members to create a “place” with their own initiative).

New members joined CHITOSE GROUP and many members have experienced educating their juniors for the first time. If you are in the same situation, it may be good for you to be just a little conscious of both “place” and “perspective”.

Tavelmout Corp. is a sister company of CHITOSE GROUP, that is developing spirulina culture technology and its application as well as retailing spirulina products. Tavelmout (=edible algae) Corporation announced on May 22 (Tue) that it had received a finance of 850 million yen from both Innovation Network Corporation of Japan (INCJ) and Mitsubishi Corporation, amounting to 1.7 billion yen in total (please refer to the press release）.

CHITOSE GROUP has been developing spirulina mass-culture technology since 2011. Tavelmout Corporation was founded in 2014 as a wholly owned subsidiary of CHITOSE GROUP and started retailing the raw spirulina in 2015 under the brand name “Tavelmout”, which is the also the name of the company.

This raise in equity capital was the result from acknowledging the beliefs of CHITOSE GROUP and Tavelmout Corp., and the steady development of technologies and performances accumulated in the previous years. In order for a big enterprise (Mitsubishi Corporation) and venture company (CHITOSE GROUP) to tackle the challenges of a new company growth model in their collaboration to develop a joint venture (Tavelmout Corp.), a scheme which allows the Innovation Network Corporation of Japan (INCJ) to provide management assistance from a neutral position for the purpose of developing and creating national industries has been established.

We are really grateful to have received a lot of positive feedback after the announcement. Many media sources, such as NHK (The momentous event was broadcasted on TV. Unfortunately the video clip is not available thus we will only share the articles that have been published online), The Nikkei, and WORLD BUSINESS SATELLITE reported the news.

※Other media sources which posted information about this news can be found here.

Since the announcement, Tavelmout members have already been busy working to establish production plants in Brunei, expanding the sales, developing new partners and products. Please look forward to Tavelmout in the future!

▶Please also refer to this article.
What is Tavelmout Corporation′s future goal, after a successful raise in equity capital of 1.7 billion yen?

●New members join us one after another!

This year, a lot of new members joined the CHITOSE GROUP family! It was a significant increase since 2014 (the number of members is projected to increase even further this month).

As new members join the different divisions such as Corporate Administration, Business Development and, Research and Development, I feel that communication has become more active in every team.

I’ve asked each individual why they chose to join Chitose, so let me share their responses with you!

Ishida (Corporate Administration Division)
Because I wanted to work in a flexible and vibrant organization, I was glad that I had a chance to work for Chitose where I felt was the answer to my desire.

Onaka (Research & Development Division)
The motivation to apply for a job at Chitose Laboratory came from knowing about Chitose’s proprietary technology, disparity mutagenesis technology. Since I studied the mechanisms in which chromosomal abnormalities occur spontaneously in cells in graduate school, I was attracted to the fact that Chitose had research and business development capabilities to utilize even the characteristics that are known to be “bad” to living things for something good for commercialization.

Okamura (Business Development Division)
The idea of using living organisms is interesting. When I was a graduate student I wanted to work for Chitose, so I felt confident that this must surely be destiny! After several years, I marketed myself to Chitose and luckily, I was selected. My major was in cell biology, but it is appealing to me that I can be engaged in a wide range of projects regardless of my specialty.

Narita (Research & Development Division)
I studied microorganisms at university for 6 years and I was fascinated by its depth and possibilities. Since I thought of wanting to test the capabilities of microorganisms in a field closer to society as well as academics, I joined Chitose for this opportunity.

Iko (Business Development Division)
I had a strong feeling that if I joined Chitose, I can be engaged in the development of new businesses from its beginning foundations and that I can contribute to making the world better through Chitose’s businesses, where the next generation won’t regret being born. I felt that it was fate so I took the opportunity to join Chitose. I look forward to new business relationships.

Omori  (Research & Development Division)
I was very impressed with Chitose’s perspective, “living organisms should be utilized as they are” and also with it’s way of thinking about technology and business, so I decided to grow here. I am pleased to have a chance to work with Chitose’s members.

Ezan (Business Development Division @Singapore)
I first came to know about the CAI after reading a national newspaper article about Ryosuke where he described the inspiration and motivation behind the company and the reasons for entering the Singapore market. The commitment of the company towards economically viable yet sustainable production of food and energy by engaging continuous advancement in biotechnologies convinced me that this is the company that I want to grow and contribute in.

Tsuchida (Corporate Administration Division @Singapore)
Having been a part of a seminar related to environmental economics in university and investigating the economic efficiency of bioethanol etc., I was mainly interested in Chitose’s businesses that are able to satisfy both economical and environmental sustainability. So I decided to apply for a chance to join Chitose.

Ozeki (Sales Planning Department)
When I consulted someone that I wanted to build a career in business that contributes to society as well as generates profits, I came to know about Chitose and Tavelmout’s business. I was awed by Tavelmout’s honorable goals and I was resolved to make this project a success. Now I am honored to be a part of the company.

Xuewei (Business Development Division @Singapore)
I was introduced to CAI through my friend, and current colleague, Justin. I am very impressed with the business aspect of sustainable agriculture and the story of how the business started out. I am very pleased to be a part of this growing business, and will do my best in the development of the market in Singapore.

Since the increase in people becoming a part of the big family, I often see the scene of someone teaching others and members having a meeting in KSP office where I am. I feel so comfortable in the bright and active atmosphere these days. It is a nice to be in a hot desking office environment, to be able to casually select a desk by the side of the person who you want to talk to! In order to not lose this vibrancy, we must maintain a place where everyone can work happily.

The next issue of HOTTOPICS is scheduled to be released in August.
If you have any suggestions, comments or queries, please direct them to news-en@chitose-bio.com!