In the final volume of the series, “The Strength in Chitose’s Algae Business”, I will share with you “the three strengths of Chitose in the algae business” that gives us our competitive advantage.

●Volume 1: Why did Chitose Group decide to take on the algae project?
●Volume 2: Chitose’s algae projects
●Volume 3: The three strengths of Chitose in the algae business (this article) 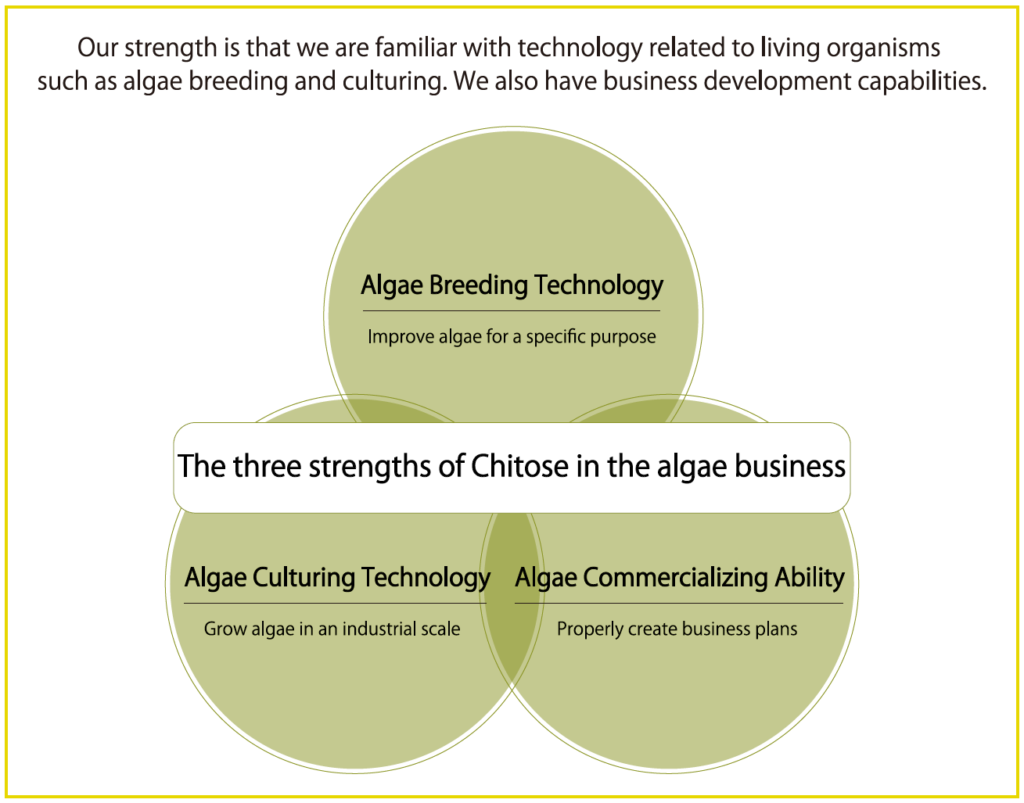 ①”Algae Breeding Technology” to improve for a specific purpose

Thus when starting an aglae project, the right species of algae need to be selected for the purpose in mind and so that you can find ways to improve its natural abilities. It is similar to selecting aspiring athletes and then further develop them.

We call this ”Algae Breeding Technology”.

It is Chitose Laboratory’s proprietary technology and  has continuously been developed for over 15 years. The strengths of the technology are that firstly, we can obtain the variants that have a large variety of mutation by introducing the mutation the organism possessed potentially and secondly, the variants can be utilized for various industries since it is not so-called “gene recombination”.

I will share with you an example of an actual algae development (breed improvement) utilized through this technology.

The alga used in this project is a species of green alga called “Botryococcus”. Since it can produce oil, with half of the product’s dry weight containing properties similar to fuels, it has been anticipated to become a fuel substitute. However, there had been major concerns of slow proliferation rate.

Thus, we tried to breed “hyper-growth Botryococcus”, which was developed to grow faster than the usual Botryococcus in Kobe University, in order to accomplish low cost and quicker mass culture.

A. Enlarge the colony size of algae

Objective: Facilitate collection of algae from the culture medium and reduce the collection cost by enlarging the colony size (it will cost more effort to collect small sized of colonies since it is necessary to use a device such as a centrifuge for separation).

C. Breed algae that can float on water surface

Objective: facilitate collection algae and reducing collection costs by breeding algae that are able to float on water surface of culture pond.

Using the strains which had acquired these capabilities, we carried out an outdoor culture in the scale of 1500m2 in Kagoshima prefecture, Japan in 2015. We plan to use these improved strains for the 10,000m2 scale production test that is currently in preparation in Thailand.

We have introduced an example (as mentioned above) of Chitose’s proprietary breeding technology called “Disparity Mutagenesis Technology” that combines the abilities required for performing low-cost and large-scale culture to become a high-potential “Botryococcus” strain with high growth speed that produces jet fuel.

Algae projects cannot be established simply by identifying positive and negative attributes of algae strains and breed them as I have introduced in ①. What we need to nurture the project to make it viable for industries is the technology for mass culture.

We call it ”Algae Culturing Technology”.

The former is a culture method established 50 years ago, using a shallow pond algae are cultured while stirring water with a water wheel or air. The latter, which was developed recently, cultures algae  sterically using tubes, films, membranes, etc.

Just as agriculture has various farming methods adapted to each crop, algae also have an optimum culture method depending on various conditions. Chitose develops a culture environment that matches “type of alga” × “unit price of product” × “climate of production place” each time, and is able to operate it on an industrial scale.

For the algae jet fuel project, we successfully cultured in an outdoor culture pond of 1500m2 in Kagoshima prefecture, Japan 2015.

It is the world’s largest culture pond for fuel applications.

Since open-pond culture is as the word means, “open”, any living organism can come into contact with the culture (contamination). Thus, we have developed the technology where Botryococcus can be cultured at the desired growth rate and concentration under such circumstances.

Contamination can be prevented by culturing in a special environment where it is difficult for other living organisms to thrive.

For example, Dunaliella is cultured in an “environment with high salt concentration”.

Spirulina is cultured in an “environment with high alkaline concentration”.

For this reason, this method is not suitable for producing things inexpensively in unit cost such as fuel.

Therefore, Chitose has developed a technology to culture Botryococcus more effectively than other organisms (contamination) under ordinary culture environment, not under special environment, and has succeeded in stable mass culture at low cost.

However, let me keep the details  of the technology as our trade secret.

Spirulina contains a balance of various nutritions, is easily digested and absorbed, and is abundant in protein. Generally it is sold as a supplements in the form of powder or tablets. In our aim to disseminate spirulina as a “food ingredient” that can provide rich nutrition as it is, we started the commercialization of “raw spirulina”.

In the process of making powder or tablets, the culture solution is generally heated to dry it. It is quite possible for the culture to be contaminated from feathers and feces of bugs and birds flying over the open pond for spirulina produced in Thailand, USA, and China. As such, with a heating process involved, there will be no need for concern for contamination that occurred during cultivation.

Since the general method used to culture Spirulina is not suitable for raw eating, we developed a culture method suitable for Spirulina to be eaten raw as well as a unique culture media while at the same time creating a greenhouse environment through continuous innovation of ideas.

In this project, we have been providing consultation and technical guidance since 2013 in efforts to collect and commercialize useful algae at Sarawak Biodiversity Centre (SBC) in Malaysia.

We are currently establishing economical and more productive mass culture methods necessary for commercialization of collected algae. Although the PBR shown in the photo is a small-scale PBR, a 1,000m2 scale PBR is now under construction. The PBR that was originally designed by Hoshino, who is leading the algae production team, will be completed soon.

By the way, I am looking forward to announce interesting news about the PBR culture soon.

What you need for any business is business development including creating business plans and raising funds. Our strength is in the fact that we are familiar with technology to deal with living organisms such as algae breeding and culturing, as well as our business development capabilities.

When you deal with living organisms, a series of unexpected things will happen. Although things like “uncertainty due to instability in ability of living things” such as growth speed can affect the project, simply doubling the number of people involved in the project will not speed up the project speed by two. Also, unlike some IT projects that can be done only with PC, expensive indoor laboratory equipment and large outdoor verification equipment are necessary.

Yes, in a business using algae, the development schedule and necessary funds are entirely different from that of the IT business. So we need to create business plans based on the facts and have know-how to manage the project. Know-hows that Chitose Group has accumulated while we have been engaging in various projects are not only for research and technology development but also for business development.

Also, the characteristic feature of our business development is that we do not create a theoretically impossible business plan.

As far as the project is based on research and development, it is normal to include processes that cannot be realized at the moment in any project. However, we should not forget one important perspective. That is, “Is the process that can not be realized now, theoretically feasible?”.

In the field of commercialization of biotechnology, it seems that there are players who try to raise funds by planning theoretically impossible projects.

For example, there is a plan to produce jet fuel that is low in unit price by “heterotrophic culture” which is performed with feeding. Heterotrophic culture does not match not only the economic balance but also the energy balance since energy (including the energy necessary to produce food for algae) necessary to produce the fuel is higher than the energy of the produced fuel. It is a funny story as more energy is consumed than fuel produced! There is such a mysterious biofuel project in the world although we do not know whether it is intentional or ignorance. Of course, in our algae jet fuel project, the algae are not fed and are raised only with sunlight energy.

［Reference］If you would like to know more about energy balance, please read this article.
Don’t biofuels produce lesser energy? -A consideration of algal biofuels based on “Energy Return on Investment Ratio”-

If this is a project to produce high-priced materials, we would consider giving feeds to grow algae. What is important is to create a business plan with consideration of all factors: materials to be produced, the places where they are produced, the algae used for the purpose, and the producing process.

In this series of articles, we focused on the stories of “algae”.

However, Chitose is conducting not only “algae” projects. We are working on the development and application of technologies to enable human beings to live in abundance for a 1000 years and beyond with the help of a wide range of living organisms, such as “microorganisms”, “animal cells”, and “plants”. Through CHITOSE JOURNAL, I would like to share with you the stories about these projects other than “algae” a little at a time.

※If you became a fan of algae, please click here.