Strawberries, the “sweet & lovely red gems”. This fruit full of joy has a magical charm to bring excitement, not only to children’s but even to grownups’ hearts.

That moment where strawberries were served at home as a young child, or the memory with mouthful strawberries at the fruit picking is nothing more than an ultimate happiness.

Strawberries are somewhat special to most of us, and they seem even more exceptional in Southeast Asia.

The “sweet & lovely red gems” available in Southeast Asia are mostly strawberries imported from Japan. Due to their high export cost with air delivery, the price hikes up as high as 5 times of the one in Japan. Moreover, most strawberries are seasonal specialties that become only available from December to March. Even in Singapore, where the nation mainly depend on imported commodity, the share of Japanese strawberries is less than 1% of all imported ones. In 2015, Japanese strawberries were imported 22 tons a year, making them only available as gifts or as “special items” for some affluent under existing circumstances.

Strawberries imported from America or Australia are available all year round on the other hand. They are large in size and look deliciously red. However, their skin is quite thick that you can even hear the crunchy sound when you bite in, and most of them are poor in flavor and taste. Strawberries are also imported from Korea, where the drain of Japanese strawberry breeds has become a big issue, but are not available all year as they are distributed in seasonal basis. Their strawberries are sweet but they are still crunchy and have little taste.

Now we can have the “sweet & lovely red gems” all year round!

Singapore, often referred to as the center of Southeast Asia, now has the privilege to get the “sweet & lovely red gems” all year since 2015. The Japanese quality strawberries are so-called “Chitose Strawberry”, and became available at half price of the ones imported from Japan.

“Chitose Strawberry” is made in Cameron Highlands, a plateau located in eastern part of Malay Peninsula. Though Malaysia is located in the tropics, the area is at 1,500 meter elevation and the climate is cool throughout the year. Its temperature difference between day and night makes the place suitable for cultivating strawberries.

Why is Kinoshita growing strawberries as the member of Chitose?
And what exactly Chitose wants to achieve through strawberries?

The goal is to bring change to agriculture in Asian region… It was the moment Chitose started to focus on “tastiness”.

In 2012, Koike* was in eastern Sabah (Malaysia). As the business development manager of water treatment project using duckweed, he was stationed at the palm-oil plantation located in the remote part of Borneo Island. The place was so rural that even locals would get shocked.

He knew too well that unfortunately nobody would listen unless there are economic benefits to producer’s side, even if he raises his voice for more sustainable agriculture style. For farmers and plantation owners, farming is their living and plantation is their business. Changing the existing method itself could be the risk.

What has to be done in order to break through this situation and achieve the goal to “expand sustainable agriculture in Asian region”, which is one of the missions set by Chitose group?

It was the moment Chitose started to focus on “tastiness”.

“The impressive experience of tasting something so delicious can change one’s purchase behaviors, and those can even change the industry structure of agriculture itself”, Koike states firmly.

*
Ryosuke Koike
Head of business development of tropical agriculture project in Chitose Group
Joining Chitose Group in 2011, Koike was soon posted to Sabah, Malaysia (Borneo Island), as the business development manager of water treatment project using duckweed. He was stationed for 4 years at the palm-oil plantation located in the remote part of the island, the place so rural that even locals would get shocked with. Based in Southeast Asia, Koike was engaged in expanding agricultural businesses in order to spread the sustainable agriculture. During his years at plantation, Koike also acquired Sabahan Malay.

As it was rare for Japanese living in the region, one day Koike heard the rumor about one Japanese growing tasty strawberries in Borneo Island.

That was Kinoshita who was engaged in strawberry farming in outskirts of Kota Kinabalu in eastern Sabah.

Koike went straight to take the 7 hour’s journey to see Kinoshita. Thrilled with Kinoshita’s delicious strawberries, he was confident that they had the “tastiness to change the industry structure” which he had been looking for.

Koike: “I just wanted the people in Southeast Asia to experience this delicious strawberry and know the genuine tastiness of the strawberries. When more people start to pay the cost worth the taste, it can shift the farm producers’ mind to grow better crops. This would bring the increase in demand of agricultural style to produce good farm products compared to the ones to produce large quantities in low cost. I believe this change in consumer needs can lead to spreading sustainable agriculture. I also wish people to know who, where and how it is made, and have interest in agriculture itself through this tasty strawberry.”

In 2014, Chitose’s strawberry project started up.

Agreeing with the idea of spreading sustainable agriculture and high qualitied tasty crops all over Asia, along with Koike’s persuasive offer of course, Kinoshita decided to be the member of Chitose. He came to Cameron Highlands in the summer of 2014 to start the seedling preparation and began looking for land suitable for agriculture. In 2015, his wife and his beloved daughter Kokoro, who was only 3 months old at the time, also joined Kinoshita to live in Cameron Highlands. It may be a bit off the subject, but Kokoro was born on January 5th, the day known as the “Strawberry Day” in Japan.

It was a rough start since there was no past record of officially importing strawberry seedlings from Japan to Malaysia. Finally obtaining the permission to import strawberry seedlings, Kinoshita imported 4 varieties. After raising the seedlings under local environment, Kinoshita completed the planting by the end of 2015 in the land area of 900 square meters. Soon he narrowed the varieties of strawberries down to 2 seedlings, in terms of their matching with the climate in Cameron Highlands. As he started to market them in Singapore by following May, Kinoshita decided to go with 1 variety after taking the market response into consideration. Today, he is expanding the seeded acreage to almost 1.5 hectares.

Ripen Chitose Strawberry made by Japanese-style agriculture with “quality over quantity” concept.

Strawberries, carefully nurtured at Chitose’s private farm in Cameron Highlands, are directly delivered to stores in Singapore without going through any suppliers. For that reason, Chitose can supply people in Singapore with extremely delicious strawberries ripen to full color and with maximum brix.

Kinoshita: “As one of the producer, I grow strawberries hoping to impress customers with one bite. I try various measures in each operation everyday…from blending fertilizers to the timing for irrigation, or the method of picking the fruit and the way of arranging them in the harvesting box, up until the packaging process. Japanese strawberries are mellower compared to local breeds, and they are very delicate as we pick them at peak ripeness. So we need to carry out each process very carefully. While I remind myself to make progress every day as a team, I also want to keep offering new experiences with Chitose Strawberry which would be different from the ones with existing strawberries. ”

Chitose Strawberry is offered in Singapore at the moment. You can find them in many prestigious stores in Singapore such as the Michelin won restaurants, the popular cake shop produced by award-winning pastry chef, and the signature resort hotel in Singapore. The number of stores counts up to more than 40 as of January, 2018.

Last year, Chitose Strawberry became available in Isetan Singapore. Though it was temporally on hold due to production volume shortage, Chitose recently restarted the distribution. Well known to be picky about Japanese food, the Singapore’s affluent population highly praised Chitose Strawberry for “being tastier than the strawberries in Japan” and “changing the whole idea of strawberries”.

While imported strawberries from Japan are seasonal limited products, Chitose Strawberry can be supplied all year round which makes it much appreciated by chefs from restaurants and cake shops as well.

Not only strawberries, Chitose offers “Chitose Tomato” too.

As the farm’s land area being expanded, cultivating items are increasing too. Chitose launched the sales of Chitose Tomato together with Chitose Strawberry at Isetan Singapore.

Just like strawberries, Kinoshita takes various measures in each operation of course, but he is especially particular about controlling the nitrate nitrogen for tomatoes. The original blending balance which Kinoshita has discovered, has a big influence on the quality of tomatoes.

There are some farmers who would visit Kinoshita to learn from him after finding out the value of “tastiness” with his strawberries. As a way to increase income other than “cost reduction” or “seeking quantity”, it seems that Kinoshita is succeeding in passing on the method to “make tasty crops with refined technology”. 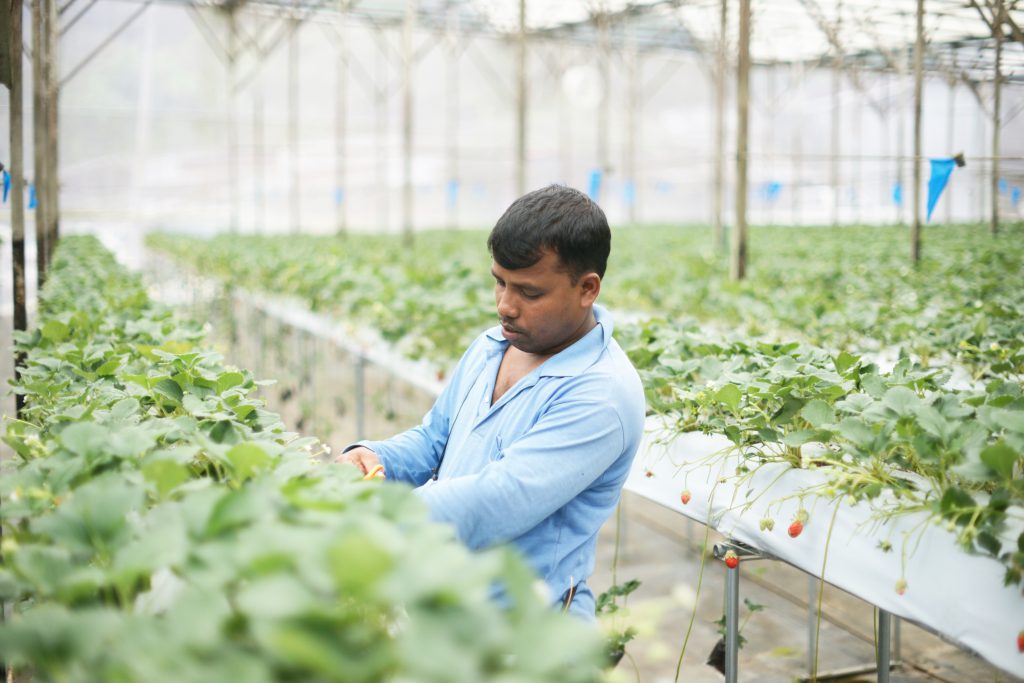 Currently, Chitose Strawberry is only sold in Singapore due to limited supply. However, Chitose plans further to increase the farmland area, hoping to make it available to the people in Malaysia (Kuala Lumpur) in the near future. Moreover, it is planned to expand its production base to other countries in Southeast Asia. In few years “Chitose Strawberry” would be available in Indonesia as well.

Driven by strawberries and by expanding the population who seeks a little bit of “special moment” with “tastiness”, Chitose’s grand project to bring change to agriculture in Asian region has only just begun. Even though there is still a lot of work to be done, the smiles brought by tasty strawberries have a marvelous power to blow all the trouble and exhaustion away. 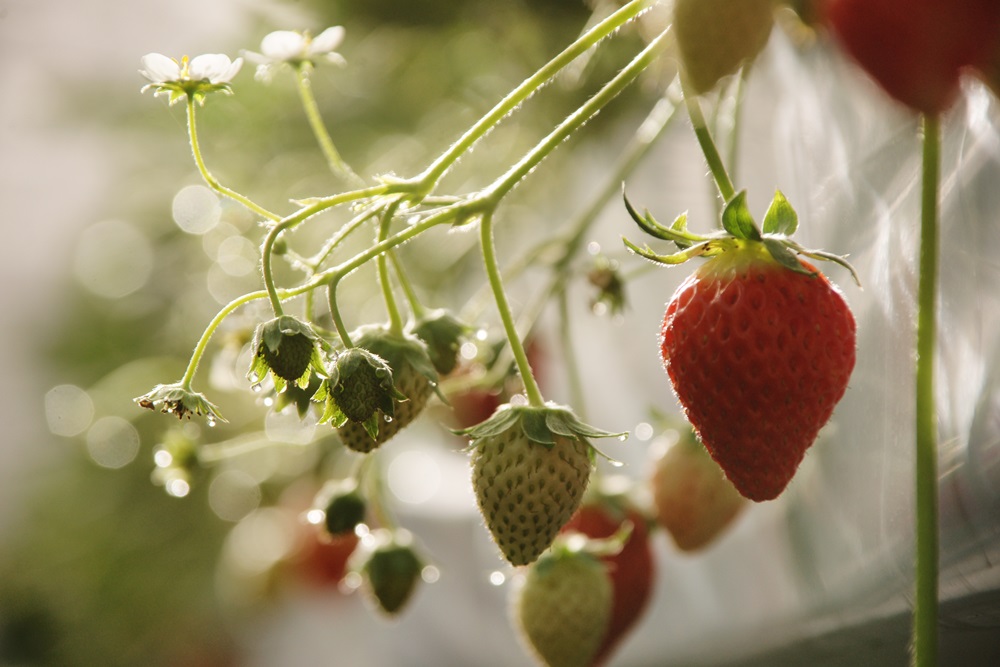