You may sometimes hear the song of the Walker’s cicadas, signalling the arrival of Autumn in Japan. However, it is still pretty hot. I will now start this month’s issue, and hope that the weather will be much better by the time I write the next issue.

〈Table of Contents〉
● A sister company of Tavelmout Corporation has been established in Brunei Darussalam
● We published a bioinformatics book
● New members join us
● Featured articles of this month
”Why focus on algae now?” – Aiming to solve the ‘protein crisis’ is the heart of Tavelmout.

▶Please read also the following article.
What is Tavelmout Corporation′s future goal, after a successful raise in equity capital of 1.7 billion yen?

Brunei is a country located right under the equator and is thus abundant in solar energy throughout the year. Since Spirulina grows by “photosynthesis”, it is important to choose the location where there is enough sunlight as an energy source. In this regard, Brunei is a suitable place for production.

In addition to the fact that the resources of Mitsubishi Corporation that had been invested in Tavelmout Corporation can be utilized, decisive factors such as a safe place, quality local human resources and available government bodies that allow for collaboration, helped us to decide on our advancement into Brunei.

Currently, several members are working to enable the start of construction of the factory in this fiscal year and start full-scale operation around next summer. Among them is the Managing Director of Tavelmout Biofarm, Suzuka who has been in Brunei since June, engaging in the important task of directing the establishment of technology and management system for the commercial production of Spirulina.

Since Suzuka is now in Brunei, it would not be as interesting if I delivered the information of Brunei from Kawasaki City in Japan. So I’ve asked him to introduce Tavelmout Biofarm!

”Hello. I am Suzuka, the Managing Director of Tavelmout Biofarm. With the cooperation of many people, we finally established a local subsidiary company in Brunei on July 13. We plan to build a factory and start producing high quality Spirulina next year.

I myself was originally involved in researching microorganisms and microalgae for many years. About 5 years ago, I participated in the Spirulina cultivation research project in Japan and cooperated with VUTEQ Corporation in Shizuoka prefecture, Japan to start the Tavelmout Business. At that time, I worked for the product development and optimization of culture conditions of raw Spirulina “Tavelmout” as the leader of the research team, but I never imagined that I would ever become the director of an overseas production company. I have know-how on culturing Spirulina and producing Tavermout, but I do not speak English very well, so I am having a hard time from the moment I arrived at Brunei.

In the midst of all these, my wife and my 2 year old son also moved to Brunei the just day before. As a matter of fact, my wife is a very good researcher who has belonged to Chitose Laboratory for many years. Sakurada (my wife uses her maiden name “Sakurada” at work) had also participated in the launch of Tavelmout business, and this time, she joins Tavelmout Biofarm with me. We worked hard together during the time of business development in Japan, and this time in Brunei, we are also going to form a tag team once again. We work in the same company, doing the same work, so we are together almost 24 hours a day. Our couple relationship has caused a few people to be concerned, but we get along very well together. Of course, we do quarrel sometimes, but I feel that it is convenient that we can talk about work at home and keep track of each other’s work and private situation. 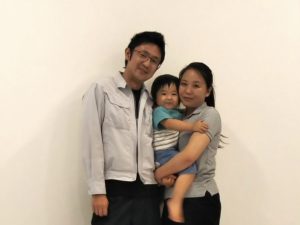 This photo was taken at their home in Brunei, but you may not get a sense of Brunei here.

Brunei is a small country located right under the equator on Borneo Island. Since microalgae have poor growth under too a hot climate, few companies are doing the culture right under the equator. However, our culture technology can allow Spirulina to adapt for culturing in hot places. . In this miracle of a country, Brunei, despite being in a tropical region where surprisingly few insects are found in human populated living areas; and I, a mosquito magnet, got only a few mosquitoes bites in these 2 months, would like to cultivate a lot of healthy Spirulina under an abundance of of sunlight to deliver it  to Japan as soon as possible.” 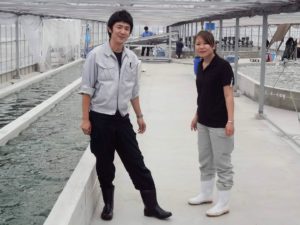 Suzuka & Sakurada working for the business development in Japan. They made a huge success in the on-site development.

They are a working couple with a 2 year old child. I can’t imagine immigrating to Brunei, raising a child in a foreign country and taking on the Spirulina production from scratch in addition to the tough situation… Before they departed to Brunei, I asked Sakurada if it was hard for her to raise her son in such a difficult situation. She told me, ”Whatever will be, will be”.  I thought she was so brave.

Finally, let me digress and share with you that the first country overseas where I landed on was  Brunei. I was in the third grade of elementary school at that time.

The destination was Darwin and Kakadu in Australia. Because the airline I took was Brunei Airlines, I transited in Brunei. I merely transited on the way to Australia (my first overseas trip may be Australia because I have not officially entered Brunei?), but I stayed at Brunei on the way back to Japan. At that time, I played at an amusement park (it was free!), which the King of Brunei made for his second wife and is open only in the evenings. Since it was a fun experience for me, like a dream (because I could ride anything for free!), I grew up with the impression that Brunei is a nice country. My grandmother remembered that I kept saying, “I will be the King of Brunei’s wife!” for a while after coming back from Brunei.

It seems like I’m dreaming again, since I’ve got a chance to get in touch with Brunei again through this project.

●We published a bioinformatics book

▶Please read this article for more information about Ogata’s career and Nihon BioData!
Find out meaning of data from a biologist’s viewpoint – about Nihon BioData Corporation-

You may think that methods of bioinformatics is already written in books about bioinformatics. However, this book is written in the form of a story with an unusual point of view reflecting Ogata’s own career and describes ways to get profit from data analysis.

Thus, I decided to write about management of bioinformatics, which plays a role to adjust the interests of the structure superior to the research such as data analysis itself.

Therefore, as a basic knowledge for managers/principle investigators without time to write codes and perform experiments, I wrote it not as a technical manual but as a readable article to give an overview of bioinformatics.” 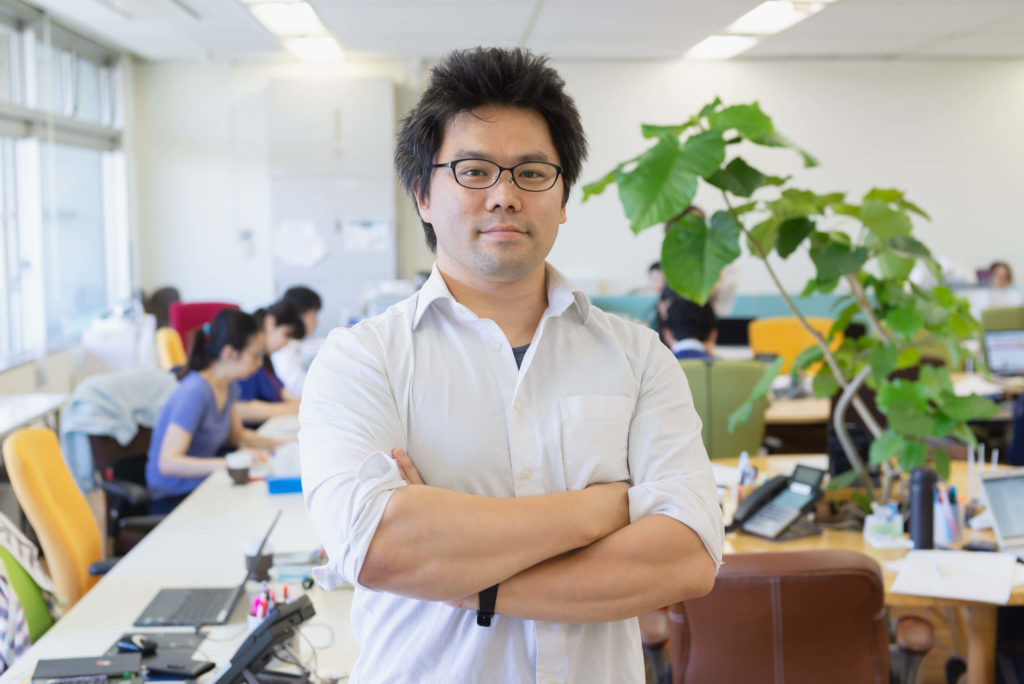 Ogata wore proper clothes only for the upper body for this photograph.
(His pants not shown were loose sweatpants.)

By the way, Ogata wrote the text of this book, a total of 120,000 characters, in the iPhone’s “Notes” application! 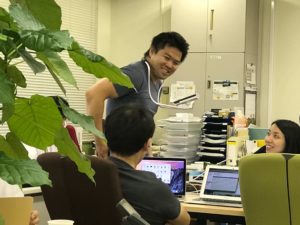 Did he take full advantage of the equipment hanging on his neck to see the iPhone without using his hands when he wrote the book? I wondered what was the strange tool making him so happy so I took a secret shot.

On another joyful note, a new member has joined us again. 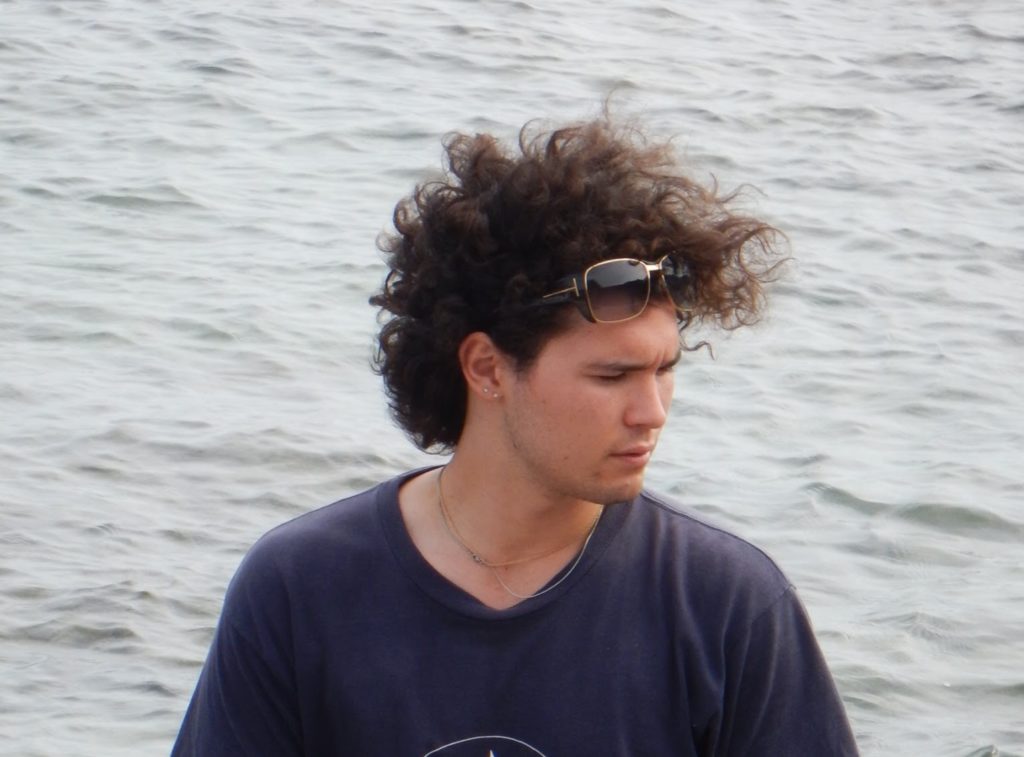 Arthur. When I told him to give me a picture for Hottopics, he deliberately gave this picture. It seems like he likes the wind in his afro-looking curls. Don’t you think that this is like a movie scene…?

“I had been engaged in overseas sales at the company where I worked after graduating from college. I started to think that I would like to work in accounting and legal affairs through my former job. However, since I did not have working experience in this field, I was looking for a company that did not have problems taking in an inexperienced person. And I told my agent that I prefer a company in biotechnology or pharma industry because I initially also liked biology and pharmaceutics, so the agent found Chitose for me.

Through the interview, I felt that I could work not only for the original hope of “accounting and legal affairs” but also for a wide variety of jobs such as business development and jobs that I can utilize my language skills. And since group companies are being established rapidly, I also felt that I could always work in a fluid situation. That’s why I joined the company.

It has been a month since I Joined the company. I have already been engaged in a wide range of both BtoC and BtoB projects, so I expect that I will experience more than I expected. I also believe that the challenging corporate style of allowing us to speak of our own initiative fits me very well.

On a side note, one of the decisive factors was that half of the first interview was a discussion about sake (with Ms Nomoto, the head of Corporate Administration Division).”

●Featured articles of this month

I will share with you the article posted on the Mynavi news’ new media “NewsInsight” that was first launched on August 1st.

Chitose Group Representative; Fujita, Chitose Group Chief Photosynthetic Officer; Nakahara, and Tavelmout Representative; Sasaki were interviewed, and it became a very informative article. Mr Tanaka, thank you very much for the wonderful article! (Actually, I had approached Mr Tanaka through Twitter which led to this interview. I am thankful to Mr Tanaka for kindly agreeing to meet me.)

”Why focus on algae now?” – Aiming to solve the ‘protein crisis’ is the heart of ‘Tavelmout’.

I felt it was cool after continuous hot days of 35 degrees or more. Then I checked the temperature, and I found it was 30 degrees. I never felt that 30 degrees was cool before, but my standard of hot temperature may have changed because of the extremely hot summer.

Then, I realized that “something like standards” for various things have been created inside of me unconsciously. I was interested in the fact that the standards is constantly changing and I suddenly remembered the word “impermanence”.

Interestingly, long time ago, I longed for “firm things”, now I feel that it’s rather fascinating to accept “changing things” and to enjoy things of that time. To become an adult may be to accept “impermanence”.