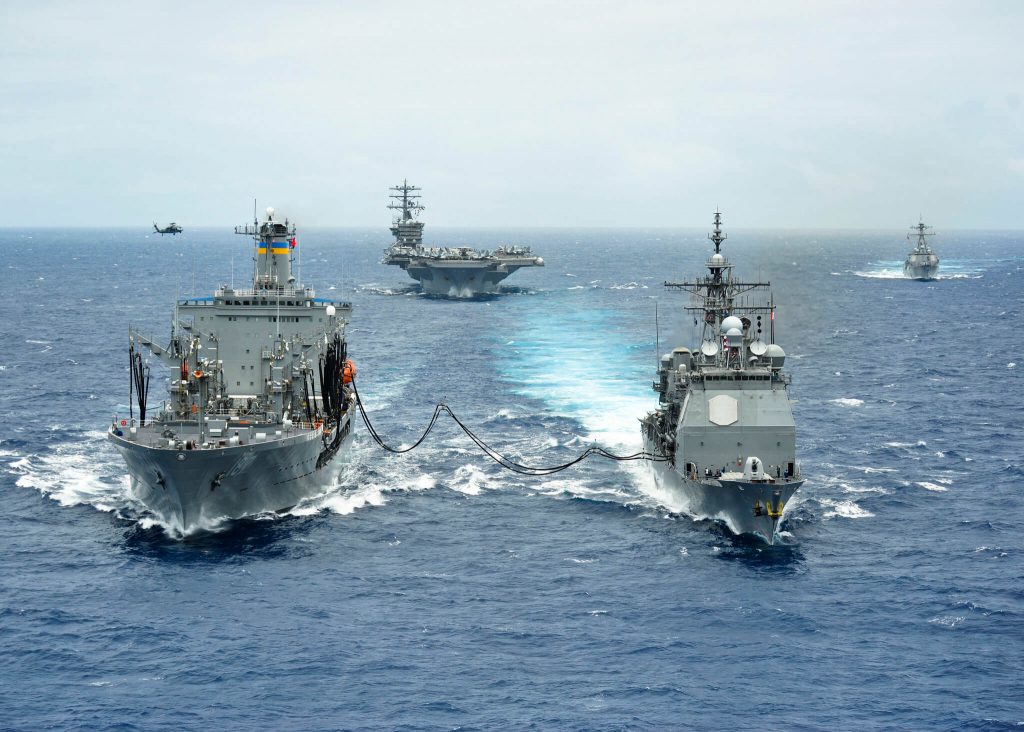 Motor shows take place in cities around the world, including Tokyo. Each manufacturer showcases their greatest masterpiece, in the form of a concept car. Concept cars attractively demonstrates the visions, designs, new technologies, etc., that is, the future of automobiles. Many people empathise with the future brought about by these concept cars , such as cars that move automatically or vehicles that run on the power of electricity or hydrogen, and support the research and development.

Even in the field of algal biofuels that we are developing, performances that show the future, such as running a bus or flying an airplane with biofuels, are frequently provided.

On July 2012, the world’s largest performance in algal biofuel field was held off the coast of Hawaii. At the joint military exercise “Rim of the Pacific Exercise (RIMPAC)” held by the US military together with 21 countries including Japan, “Great Green Fleet” conducted the first exercise using biofuel. It was a large-scale performance using a huge aircraft carrier.

PIMPAC 2012 used biofuels derived from algal biomass produced in a “heterotrophic system” by former Solazyme (presently Corbion), a US biofuel venture, together with fossil fuels.

This performance received various criticisms at a later date. And yet, the pride of the United States as the leader of “dream” made U.S. Department of Energy (DOE) publish literatures such as ”National Algal Biofuels Technology Review” that summarized comprehensive discussions including those criticisms.

Why was the performance of the Great Green Fleet at RIMPAC criticized? One of the reasons is because the biofuel used was produced heterotrophically.

Various types of biomass are used as raw materials for the production of biofuels. For biofuels derived from microalgae (hereinafter referred to as algae), the raw material is “algal biomass”. 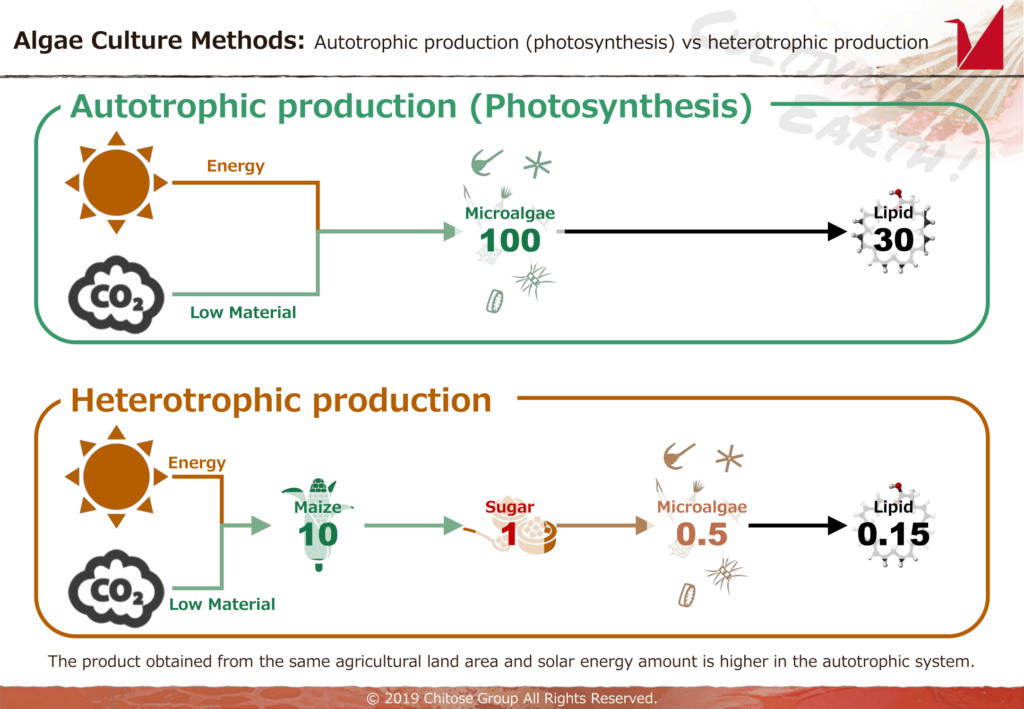 The product obtained from the same agricultural land area and solar energy amount is higher in the autotrophic system.Autotrophic production is a method of producing biomass using light (in many cases, sunlight) as an energy source and carbon dioxide as a carbon source. Most of the agricultural production use this method. On the other hand, heterotrophic production is a method of producing biomass by using organic compounds (in many cases, saccharides etc.) as both energy and carbon sources. This method is used for growth of many animals including humans. (For detailed information, please refer to this article.)

Majority of algal biomass used by industries is produced heterotrophically

Currently, algal biomass is used not only in fuels but in various industrial fields, many of which are produced heterotrophically.

For example, DSM, diversified chemicals manufacturer in Netherland, manufactures a DHA (docosahexaenoic acid) product that is produced from algal biomass by producing algae such as Crypthecodinium and Schizochytrium in a heterotrophic system. Corbion (former TerraVia) produces edible oils and protein powders from the biomass of heterotrophically grown Chlorella. “Kobe Euglena” made by Kobelco Eco-Solutions, which had been a hot topic for a period of time, is also a dried powder of Euglena produced by heterotrophic culture.

“Heterotrophic production” is not fuel “production” but a substance “conversion”

“Heterotrophic production” is not a fuel “production” but a substance “conversion”.

For algal biofuel development and research, algal biomass produced heterotrophically is frequently used. Algal biofuel used for the performance by RIMPAC, which was described at the beginning of this article, was also produced in a ”heterotrophic system”.

However, a big question arises in this situation. Can  fuel production utilizing biomass produced heterotrophically  be called “fuel production”?.

In “National Algal Biofuels Technology Review” published by U.S. Department of Energy (DOE) in 2016, it was clearly described that algal biomass and fuel production by heterotrophic cultivation are “conversion process rather than a primary source of biomass”. Currently, DOE clearly excludes research and development of biofuels based on “heterotrophic biomass production” as a possible  subject to invest their research funds.

It should have “produced” the fuel, but why is the amount of energy lesser!?

The total amount of energy available in the final product fuel is greatly reduced compared to that in the raw material. In exchange for the large energy loss, glucose is “converted” to jet fuel with a higher energy density via an intermediate substance such as biomass and oil.

Even if we look at only the algal biomass production (glucose to biomass) process, the total amount of usable energy is greatly reduced. Although the energy density is not as high as that of jet fuel, glucose is already a substance having a relatively high energy density. Thus, it is most efficient from the viewpoint of energy utilization to use glucose directly without going through the conversion step. Therefore, the heterotrophic algal biomass/fuel production is positioned as a “conversion” process, not as a “production” process.

On the other hand, autotrophic algal biomass and fuel production greatly differ from heterotrophic production.

Sunlight is falling in abundance, more than the amount required for current technology and is not suitable for storing and transporting as an energy source. Thus, autotrophic fuel production from algal biomass utilizing carbon dioxide as a carbon source can truly be positioned as fuel “production”.

Whether you will utilize a heterotrophic system or a autotrophic system, in either case, you should always consider the “Energy Return on Investment (EROI)” as one of the most important criteria in biofuel production.

For example, using oil with an energy amount of 100 to produce fuel with 90 energy (EROI = 0.9), the value of fuel production is fundamentally low, and it is better to use the oil used for fuel production as it is. Basically, EROI needs to be 1.0 or more to be efficient.

In addition to EROI, in order to realize the sustainable biofuel production for commercial use, it is necessary to meet various criteria such as carbon balance and economic balance.

Only performance is noticed in the biofuel industry

How is the current situation? The words such as “biofuel”, “photosynthesis”, and “algae” somehow give the impression that it is good for the environment. Thus, such impression is used for improving corporate and national image through various projects.

However, do they have sufficient fundamental arguments about raw material procurement, EROI, carbon balance, economic balance, etc., which form the basis for commercialization of sustainable biofuel production?

In many cases, many people use the good impression of photosynthesis for their performance without speaking about the fact that they actually select a heterotrophic system and do not mention much about EROI, carbon balance, and economic efficiency.

Pride, the one who is leading the “dream”

I do not completely deny all the performances. It is effective to partially embody “dreams” and “future images” in order to share the importance and necessity of research with a lot of people and to secure research funding.

However, the performance that presents “dreams” and “future images” should be a means to have more people deepen their empathy and understanding of essential parts, and not for using people who do not understand essential parts. And it is also an important responsibility for those who try to involve people in the “future image” to depict a concrete way to reach “dreams” and “future images” with their pride. For this purpose, we are also working on information sharing.